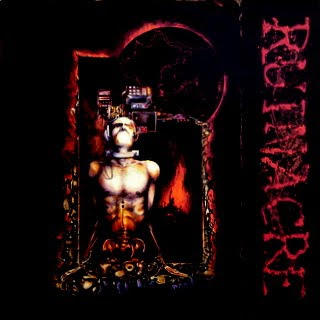 Among the many jewels in the Satan's Pimp crown is today's offering, the Ruinacre LP. The band also brings us back to Arizona, but this time we venture to the highlands (Flagstaff) and this time we step completely out of mid-paced metallic hardcore territory. The terrain occupied by Ruinacre is an alien one where otherworldly entities resembling tech-metal and others vaguely reminiscent of nineties hardcore battle for dominance. In our own dimension, they might be a temporary peace pact between later Abc Diabolo and Creation Is Crucifixion, and in our language we would be made to use adjectival phrases like fast as fuck and perplexing as bloody Hell.

i was listening to vae victis the other day and happened to think of these guys (similar sound i guess). i sold the record ages ago, and wanted to hear them again. leave it up to you to dig out the most obscure 90s shit...thanks

thanks! been looking for some ruinacre (you have a habit of doing that...)

also... you should know the casebeer brothers have a new band - this runs on blood.

awesome recorded, but seriously... one of the best bands i saw last year, no question (like, no regrets for being at the show they played while fucking AMEBIX played a secret show at the punk dive bar across town - they rule that hard).

Hey EC, yeah pulling treasure from the nineties trash heap is my specialty... or so I'd like to think. Oh, and I've got a couple of Burned Up, Bled Dry eps I could post if they're OOP. Those guys are still around, huh?

Yo, Jacqui, my other specialty must be reading the minds of the 6 people who read this blog! Which doesn't explain why I've not heard of This Runs On Blood! I'm looking into that right away. (...gotta love that name, Casebeer). Thanks as always for taking time to comment and for dropping those links!