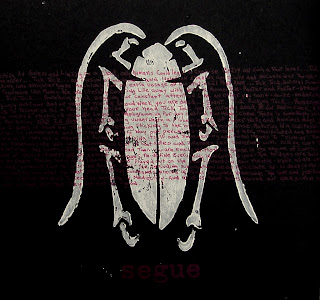 Segue has a curious fascination with insect imagery, as well as burroughs-esque slip-stream bad-trip lyrics. On this 7" we also get to hear a fairly early account of these Minneapolitan's loose-structured fusion of crust, metal, folk, and noise that, while depressing, leaves me guffawing like a mad scientist. The monster given life here is a challenging one, but ultimately one that could open some doors. Recommended for those who resist following formulas.
The idea was to post the rest of Segue's discography, but their two 10"s are still widely available. Hit up the links below if you have a turn table. I don't know, maybe I'll post them as a limited time download later this week(?).
I just noticed this is post # 400. How the hell did that happen?
Segue 7"
Segue/Inflicted split 12" post
Buy the 7" here
Buy the 10"s...
NIC
Active Rebellion
Puke'n Vomit
Posted by Batguano at 4:51 AM


long time looking for this stuff and no dice! i think i had some mp3s from one of their albums back in 2002 or around that time (soulseek was at its peak for obscure shit then)

thanx a lot,
I have their disography on vinyl, but don't have the material to put them on internet.
Looking for it since a long long time, hope you'll post the two 10".

thanx a lot,
I have their disography on vinyl, but don't have the material to put them on internet.
Looking for it since a long long time, hope you'll post the two 10".

I bought this 7 inch a while ago with no information on them at all. Thanks, now I know a little more.