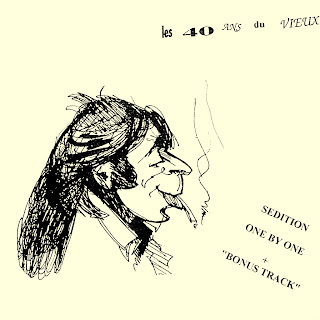 This is a pretty odd ball 7", but that only makes it doubly worth a post! One way to look at this is to call it a One By One/Sedition split 7". A more precise description would be a One By One live 7" with a (badly) studio(?) recorded Sedition track. It was a 40th birthday gift for "Le Vieux" (depicted above); Sedition was supposed to play at this gig and be a more substantial part of the final output, but ended up breaking up too early. The good news is that the One By One tracks sound pretty damn intense (Keep in mind this is coming from a HUGE One By One fan who is not much of a live recording fan) and the Sedition track rules like all of their stuff did/does, even with the muddy recording. Let's see, what am I forgetting?... The 1b1 set was recorded in a farmhouse near Tours, France and includes a cover of "Police Bastard."

Here's a photo of One By One at the same show, graciously offered by Fab(rice): 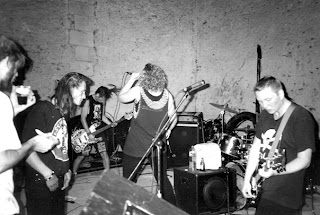 Labels: France, hardcore, One By One, punk, scotland, UK

great post - I thought I knew about all one by one vinyl but missed this one. Do you have any other one by one you could post?

A new post about Orleans hc people....
This ep was a gift for Michel Rose (le vieux) 40 y birthday party. It was a private party w/one by one and sedition shows, in a farm (la ferme du grand bourreau near Tours and Orleans). Sedition didnt play and one by one played a good gig with Michel Rose (le vieux) on vocals (police bastard).
It was a funny show, in country, i had taste the diy beer of sned....
The show and the ep were a gift for an old punk guy called Michel, which do so much things for punk in France. Actually, Michel Rose is record dealer on ebay (try oldrose). Hope one day to drink another beer with that nice guy ! Cheers MIchel le "vieux".
So enjoy the ep and thanks for the rip.
Fab Tigan

Besides the compilation tracks that can be found all over the blog, I do have the 7"s is you're interested.

Fab, always nice to see you here. Thanks for the info and you're most welcome for the rips!

yes - Any of the one by one 7"s would be fantastic (except for the live one which I found on soulseek). Such a great band and so underated. If only I could find the lp - grrr.

I've got the Lp and am willing to upload for anyone who wants it. I'll post a link in the comments here soon.

I can alway count on you Mike! I remember you offering to contribute this one, but I flaked. Thanks for coming through. If it's all right, I'll put this link in my forthcoming 1by1 post, or I can upload it myself.

Yeah, go ahead and use that link if you want. I can send you the cover art as a separate JPEG if you like, just let me know. BTW, thanks all for the background on this Ep... I've had it for years but never got the full story on it's weirdness...Cheers!