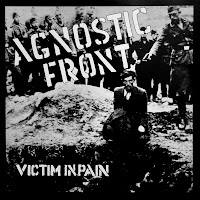 It was great to finally hear "Victim In Pain" on vinyl thanks to Bridge Nine who put out the well packaged re-issues with butt-ugly covers. Well, they're not ugly; they would make good menus or something. Not that the original was pretty to look at, but it was authentic. They used the original recordings, why not the covers? Anyway, "VIP" is one of my top ten early '80's records (I was never into buying at collector prices. I settled for years with that cool Combat CD that also has "Cause For Alarm" on it), and easily one of my favorites of all time. Agnostic Front was often challenged for their politics (or other people's perception thereof), but on "Power" they dig their trench before an abstract enemy most of us can feel good uniting against. And, as the band professes on many songs, unity is in fact what we're all about...

"Power" by Agnostic Front
Posted by Batguano at 8:17 AM