Song of the Week: "Drowning In The Aftermath" (Schifosi) 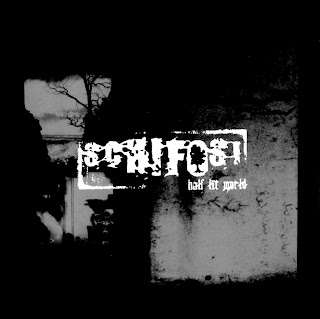 Coming out of a 3 year, late-nineties bender of straight His Hero Is Gone, I needed something to keep me going, and keep the edge off. This and my unreconciled need for more bands like Unhinged led me to a little known Australian band called Schifosi, specifically to "Ill Winds From Outopia." The abrasive character of the vocals and Swedish-style drumming were smoothed over by the dark, malty guitar leads with the insidious after-effect of both satisfaction and craving. The year or so after this discovery is a bit of a blur, until "Half Lit World" came out. There are only four tracks on this one, but even after the great final 12" was released, I consider this 7" to be the band's finest achievement. "Law Is Freedom" and "Drowning In The Aftermath" are still my two favorite songs by the band, but after binging on both, "Drowning's" forceful build-ups and excellent songwriting put it in the #1 spot.

this is a nice ep,all of their releases are great,Absentium Existence lp is my fav. piece of vinyl.
cheers

if mr. 7inchcrust writes here, i must write here too, i guess.hehe.
absentium existence i think it's more of the kind "i have do it again again and again". Although it's very good, it's not the powerfueling album, at least for my ears...
this 7'' rips. but sometimes it's like you here tragedy's todd in the backing vocals...
Good or bad?

Billy, "Absentium" is a brilliant piece of work! I favor the EP because it was the first to really show how incredible this band is; but, yes, AE has more noteworthy songs on it.

Mikxxx, I would say... good. Tragedy may have defined a new sub-genre, but I think some bands succeeded in following without sounding generic. You could easily say the backing vocals sound like Zero Hour's, who predate HHIG (1994). I think these guys sound distinctive enough, plus they rule!(opinion of course).

amazing band, some unreleased final recordings are floating around, someone should hassle them to put them out proper.

Man, I hope someone does. I didn't know about the recordings 'till now, so thanks. Maybe they'll leak out onto soulseek or something.

Hi thankks for sharing this