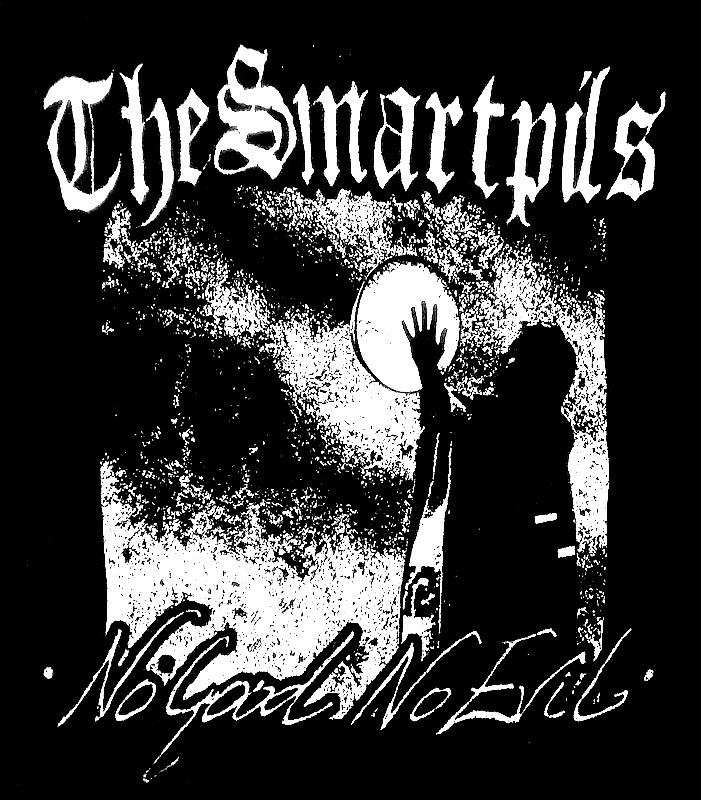 While we're on the topic of dark, mysterious, post punk bands from yester-year (and with Tim Crow on bass too, no less), The Smartpils have been name-dropped on this blog a few too many times to not post some of their work.  Maybe they're not the intuitive choice for my first summer post, but I have to admit... I've been infected by the mutated gothy germ that's been going around.  The Smartpils (or Smart Pils if you prefer) could teach some of these new bands a thing or two. Unfortunately the Pils have taken measures to not tout their role as an influence, or even that they were once a band.  Like many, I thought their mighty "No Good, No Evil" 12" and their first demo comprised their only recorded material.  The digital age, however, has provided the proper implements to exhume some fine Smartpils treasures from their analog graves.  Cassettes seemed to have been the bands' favorite M.O., but I own none of them.  I had to grave-rob the cheap and unadventurous way via peer to peer download.  Considering this, some of the tape rips below are of varying quality (decent to piss-poor).  I'm just glad to have them, and if you happen to be one of the rippers whom I downloaded from, infinite thanks to you.  The rips of the aforementioned 12" are my own, as I was tired of the lackluster ones I had been clinging to for years due to some twisted sense of loyalty or just plain laziness. 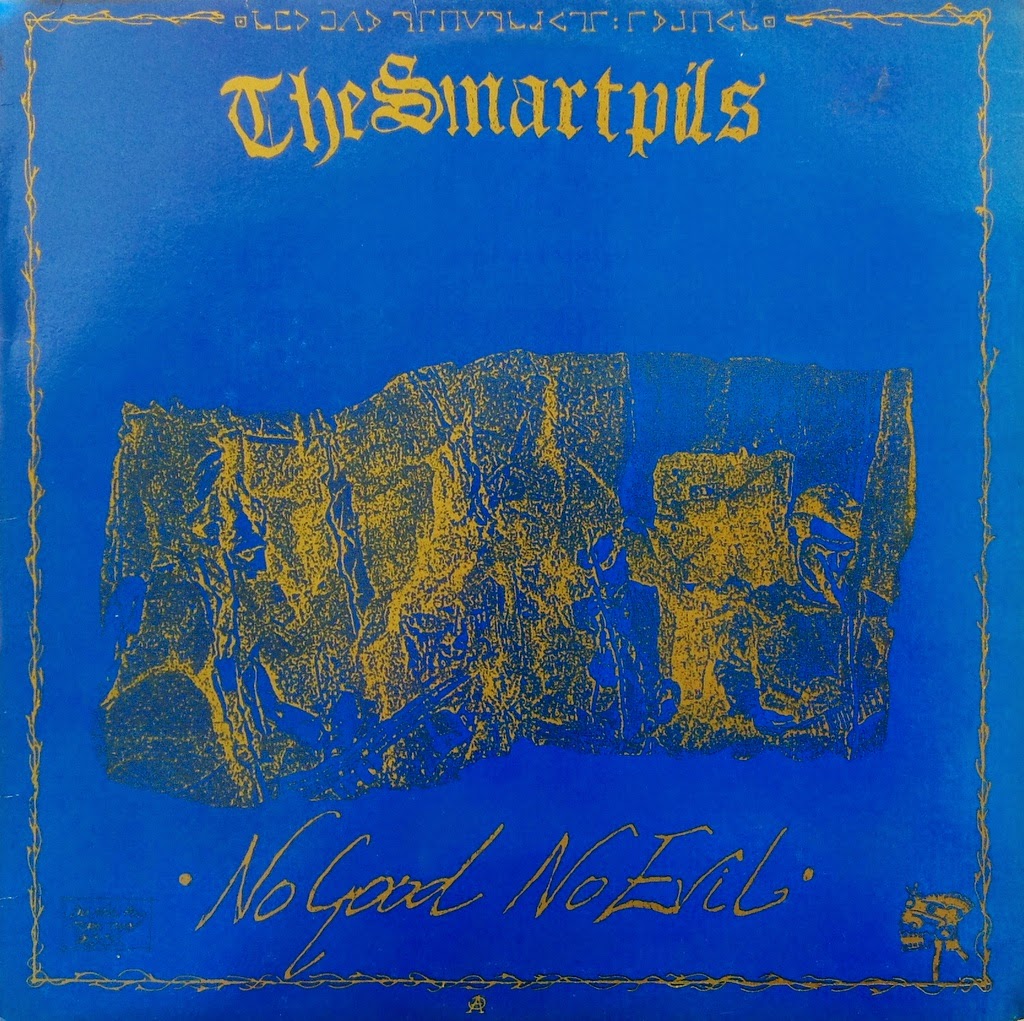 
As far as I can tell, Smartpils released three demos-- the one mentioned above, "Toxic State," and "Zen Punk." I tried to find the best quality rips, but the pickings were slim.  As always, if anyone can offer more info or point us in the direction of better rips, you are strongly encouraged to get in touch!

And now for some compilation appearances.  For all I know, some of these recordings are not exclusive and may be redundant if you download all the links I'm putting up.  I just wanted to throw different rips out there. Seven of the tracks come from a cassette called "Wessex 1984," two come from "Open Mind Surgery," and two others come from two volumes of "Aquae Sulis Calling."  The last in the list is of particular interest if you enjoyed the previous post.  The two tracks in question do not have the usual vocalist on board, and could easily pass as Zygote songs (I would love to know the line-up on "Brothers of the Head").  Both comps are available for download or streaming from the label's bandcamp page.

Although the "All And Everything" tape has many of the songs from the demos, there are some interesting odds and ends, plus, even though the bit rate on these rips isn't great, the clarity of the songs is better than some of the rips in the demo link.  In addition, there's a 40 minute live side.

A great follow-up to the previous post. Another band from the Amebix family tree. Anyway, can you re-up Artimus Pyle's split with Crow and the the Damad EPs? Thank you.

An interesting band it is. Somewhat similar/reminiscent to the dark Post-Punk of The Estranged or Lost Tribe. Or even Signal Lost. Can you reupload the 'Arctic Flowers/Spectres split' and the 'Decrepit splits with Cephlatripe, Scathed, and Phalanx'. The links were all down. Thanx. Keep posting great stuff and quality Punk/Hardcore/Crust. Cheers.

Hey guys. I'm out of town but I'll get those files up by mid next week upon returning. Thanks.

If you saw what I saw… Greetings, earthling. Because I was an actual NDE on the outskirts of the Great Beyond at 15 yet wasn’t allowed in, lemme share with you what I actually know Seventh-Heaven’s gonna be like for us if ya believe: meet this ultra-bombastic, ex-mortal-Upstairs for the most-extra-blatant-and-groovy, pleasure-beyond-measure, Ultra-Yummy-Reality-Addiction in the Great Beyond for a BIG-ol, kick-ass, riskyNrisqué, party-hardy, eternal-warp-drive you DO NOT wanna miss the sink-your-teeth-in-the-smmmokin’-hot-deal. YES! For God, anything and everything and more! is possible!! Cya soon...

Does anyone know this band/song I'm thinking of? Has something to do with whales (pro-earth, animals), has a slide guitarish sound and some whiny vocals? Sorry if its off topic but its bugging me.

Could you re-up the In The Spirit of Total Resistance comp? It would be greatly appreciated.

Hi folks I’m compiling everything at the moment, with the help of George and Richard, putting a load of Smartpils on bandcamp, more has surfaced in recent times and. Trash City (our old mate who now lives in Japan) have re-released.
If anyone is still interested I’ll post the links here soon.
The Swampnet link is a little out of date but all the pages are still up.

hello everyone, I am Thomas Gift. I want to use this medium to appreciate Dr Ogbeifun the great black magic death spells caster for the successful death spells he cast on someone for me. I contacted him when my husband left me for another woman who uses witchcraft power to take my husband. I was desperately in need of help when I found his contacts online about his genuine powers. I told him my situation and how I wanted the bitch who took my husband gone. He told me not to worry. He cast the death spells ritual on her and the bitch died in her sleep within 24hours. Now my husband is back home and we are living happily. Thank you so much Dr Ogbeifun, You are so real and true. Below is his contacts in case you want to contacts him Email: ogbefunhearlingtemple@gmail.com website https://ogbefunhearlingtem.wixsite.com/spell or add him on whatsapp +2348102574680

Hello to you all on this site it brings me so much joy and happiness today so i decided to share my happiness and testimony to you all, my name is Rabia Piroe am from New York am 38 years old i was married to Mr Mitchnick Hunfrey he is north America we have 3 grown up children. two years ago my husband said he needs a divorce that he is no longer interested in the marriage that was how my husband left me with the children and moved to another state with his new girlfriend who charmed him. I traveled to greet my friend and her family during Christmas celebration then i explained to her, how my husband has abandon me and my children for a period of time and be with another woman, and my friend told me about Dr Ogbefun the great spell caster who had helped her in the past before, when i contacted him with his email via ogbefunhearlingtemple@gmail.com i explain to him, how my Husband has been with another woman for two year now and that's the problem am facing in my marriage now and i need to end it by killing her, and i don't want to make use of assassin because it will be risky so i needed to do it in a spiritual way that's why i decided to contact him, he assured me not to worry as i have contacted the right person at the right time, i co-operated with him and in less than a week she die, she slept and never woke up, and truly my husband come back apologizing that he never knew what came over him my husband apologize to me and we are happy family now. all thanks to dr ogbefun you can contact Dr Ogbefun for any death spell, such as killing your superior in the office and take his or her place.spell for increase in salaries, spell for promotion at the office, spell to get your ex lover back, if things is not working well in your life then you need to contact him now via email ogbefunhearlingtemple@gmail.com or add him on whatsapp +2348102574680

Hi everyone, I am Sharon. from Poland I want to use this medium to appreciate Dr Ogbeifun the great black magic death spells caster for the successful death spells he cast on someone for me. I contacted him when my husband left me for another woman who uses witchcraft power to take my husband. I was desperately in need of help when I found his contacts online about his genuine powers. I told him my situation and how I wanted the bitch who took my husband gone. He told me not to worry. He cast the death spells ritual on her and the bitch died in her sleep within 24hours. Now my husband is back home and we are living happily. Thank you so much Dr Ogbeifun, You are so real and true. Below is his contacts in case you want to contacts him
Call/WhatsApp: +2348102574680 Email: ogbefunhearlingtemple @ gmail. com