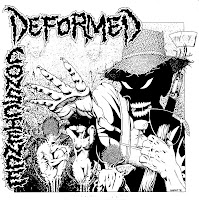 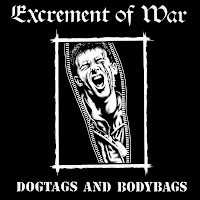 The crust bonanza continues with a nineties classic: The Deformed Conscience/Excrement Of War split LP. This thing is so crusty I had to scrape barnacles off of it before I could rip it for you! I feel like this has been posted elsewhere, but the bustling blogotropolis can only benefit from more rip-choices. DC played kinetic crust that sometimes bordered on grindcore, and was backed by a hyper-active drummer who knew how to spice things up. They have/had a discography double LP available from Unrest Records, and members went on to form another raging band called Hail Of Rage (discography also available from Unrest). Now, as far as I know, EOW's material is not as easy to find. Their take on the Doom/Hiatus style of UK raw-punk/crust is pretty damned scathing, although I miss "Cathode Ray Coma" which I foolishly sold long ago. The tracks on this split are pretty straight forward and this time feature Mags doing the vocal work by herself. Don't forget to stop by 7 Inch Crust and Am I Mean? to pick up a couple of EOW splits.

Downloading as I write, but I know I've mentioned it before, you can't beat that singingbox you have, for sampling the wares. Not eing scared to go on in life forever repeating myself, I can't get over the magic you have with words, ie. describing DC as "kinetic crust". Perfect man, for a pretty ripping band. You, Aesop over at Cosmic Hearse, and Jason over at Lo Res-Viscera, inspire me. As far as I'm concerned you can't go wrong with EOW, a I'm a sucker for female fronted crust bands, but you already knew that (Dearborn SS). You've done me right once again sir and thanx for the links to more EOW stuff.

Hey Justin,
The uniqueness of the Mustard Relics experience is a real motivator for me too. You put a lot of heart into what you do, and that totally rules!

Hi
First of all this is a great blog :D and I wondered if you could upload this album again please.
Cheers from Mexico

Hey Abraham,
Hopefully you are reading this message. I'm sorry it took such a long time. The link in the post should work now.