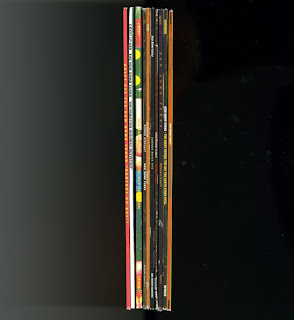 Let's take a three and a half minute break from the crust, shall we? Some rock'n roll I think is in order, but tonight it's the kind that lets you catch up to it just long enough to give you the finger, and then leave you with a mouthful of exhaust! This is the highest octane of rock delivered by four smart (ass) Ohio dudes whose engine was fueled by equal parts punk, rock'n roll, and buzz-saw noise rock. The New Bomb Turks have the distinction of being the only band I've fallen hard for after hearing them as "set change music." Is it just me and my area or is it a requirement that set-change music has to blow? Anyway the song was "Dragstrip Riot," and since that moment I have been a NBT fan (although I stopped following them after "Drunk On Cock"). "Destroy Oh-Boy!" remains one of my all time favorite albums of any kind! That raunchy guitar distortion, those random ecstatic shouts... so much fire, sweat and angst! Hopefully you already love this band (or this record at least), and if you don't, give 'em a shot. Oh, and... if you can recommend any other records of theirs that rock at least half as hard, do share.

you would probably like Zeke a lot, judging by how you describe this band

I think I would, but I've been putting off exploring them for a while now.

Totally! "Destroy" was just too perfect (in the best way possible). I can't believe the band actually didn't provide lyric sheets because they figured no one would be interested. I think the lyrics are great. Anywho, I have a live 12" somewhere (early/mid '90s) I should probably post...