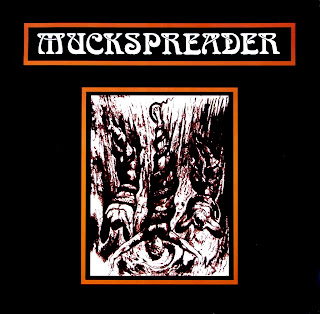 Muckspreader, also known as that band Spider was in after Zygote & Amebix, was a short-lived crust band and its output shows it. Besides the four songs on the 10" posted here, they released a 7" and did a Subhumans cover on a tribute comp. Other than that, I'm unaware of any other output (please comment if you're of a more enlightened bent). The band stays out of the rut of crust redundancy by absorbing and interpreting the styles of all the great UK bands of their recent past: Axegrinder, Deviated Instinct, Spine Wrench, Filthkick, Zygote, Amebix... maybe a little Bad Influence (?...I know, they're Belgian). The 10" compiles a pretty wide array of sounds: a slow chunky crust dirge ("Muckspreader"), a mid-paced punk ditty ("Browner"), a galloping thrash attack ("Original Sin"), and a sludgy throw-back rocker ("No Stranger To The Knives"). Quite an interesting ride...

Thanx for linking me up bro on that tribute album, Muckspreader was one of my faves on that. Can't wait till I get home on my computer to give this one a run for it's money. Thanx again.

I'll be short. THANK YOU!!!
The long wait is over.

Good stuff. i missed out on their US tour by a week or so. Although i did see Ex-Mass, which was Stig's band, around the same time. Wish they had put something out, they were amazing live.

Hey Justin- No prob... that comp post you did was great!

Malisha- It was the least I could do since I've downloaded a ton from your blog!

Lloyd- Ex-Mass?!? I hadn't heard about them 'til now. I must say I'm intrigued. I'm on the hunt now for some live recordings!

thanks Marc :)
i never heard about Ex-Mass too, i entered slsk but there's nothing there..

Yeah, i'd never heard of them before seeing them, and have never heard anything about them since. And that was almost 11 years ago. So who knows.....