Song Of The Week: "The Mad Dog" (Judgement) 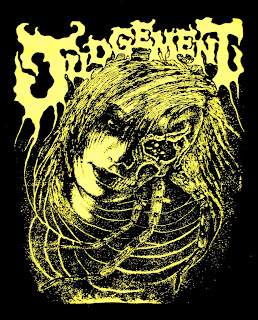 There are hundreds of hardcore songs that get my blood boiling, but "The Mad Dog" is way up there on the list. Just the thought of members of Bastard and Death Side joining forces will heat things up, but the actual output?... totally delivers! I love "The Mad Dog" especially because it showcases the hints of despondent melody the band would throw in once in a while to set them apart from all the other Burning Spirits greats. I don't own anything by Judgement, mainly because I simply can't afford the prices people are asking. But I've got all the material from the 3 or 4 EPs they released on mp3, and I go back to those tracks as often as I do Bastard's stuff (and that's pretty damned often!). Tons of blogs probably have the Judgement EPs, so start searching... you won't regret it!
"The Mad Dog"
I figured this band came and went long ago considering the rarity of their vinyl, but according to this flyer I got a couple of days ago... well, look below the Amebix logo... 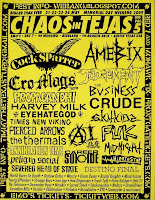 Fucking amazing song,probably their best one.Getting Judgement records for me was really pain in the ass,somehow i menaged to get all minus Process 7" which is really pricey.But i have some good news, there will be reissue LP (probably first 4 eps) on Prank records soon :)

Milan- my compliments once again on your superior taste in music! Also, thanks for the tip about the Prank repress... I'll definitely get me a copy of that! Hopefully it won't be one of those projects that gets delayed forever...

Hey Cheerokie, thanks for the compliment and good wishes. Your blog looks awesome!