Keep It In Your Pants 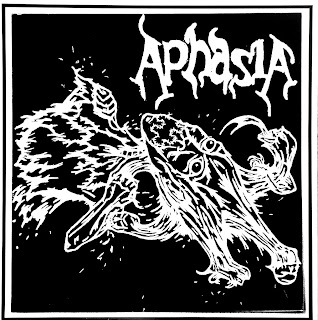 Bands that release one good 7" and then break up... is it better to just forget about them? It's such a tease, you know? Since obscurity often fuels (and enshrouds) this blog, I'm gonna keep the rarities and one-hit-wonders coming. Tonight's post is the only release by Aphasia, who changed their name to Die Screaming and recording a demo under that name (hey, if I rotated the cover art the wrong way up there, let me know...). If your tastes are anything like mine, these four tracks would have you combing the web for whatever splits or comp tracks you could find. Sorry, no dice. This is it. So what is it? Super-charged nineties-style crusty hardcore with vocals that sound like a more pissed off Ashley from Signal Lost! Chani's vocal chutzpah really turns this good band into a great one; you know, one whose LPs you'd be more than willing to throw down some dough for (damn it!). Chani and Aaron started Icon Gallery, which sounds equally promising (but in a different sort of way), so support the hell out of them!

all you had to say was icon gallery and im on it :)

these guys(and girl) are really good... i didn't expect to like this so much.
and yes,vocals are close to Signal Lost

keep on keepin' on. i enjoy yr blog. check mine out if you feel the urge. it needs some more love and touch-ups, but you get the picture.

but I'm sorry to tell you that I didn't have to comb the web cause digging through my CDs was enough to confirm my suspicion that APHASIA had released (at least) one other track (if there isn't/wasn't a 2nd band with the same name).
that song's called "The Untitled March" and appeared on the SHORT, FAST & LOUD comp. CD that had only bands with female members...

cool post and a fine record. speaking of obscure, do you have any wisigoth you could maybe post in the future? i know they did a 7", the split with jobbykrust, and a full length that i forget the name of. anyways, great stuff that i foolishy sold years ago.
mike.

Hey, all things heavy, I am totally down with The Heap. It's creepy how similar our musical tastes are!

Papst- no need to be sorry. Your expertise is always appreciated, as is anything by Aphasia!

Mike- coincidentally, I've been on a Jobbykrust kick lately. I've got nothing by Wisigoth currently, but I'll be looking around.