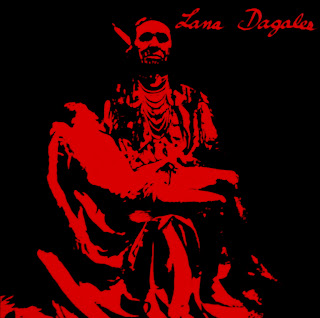 Lana Dagales may be best known for their ferocious split LP with Iron Lung, but their debut EP is a real instant reputation builder too (Sounds of Betrayal, 1999 (pre-Putrid Filth Conspiracy ?)). That reputation would be the ability to play brutal as fuck grindcore/"powerviolence" with an assassin's precision. My only complaint? It's too short. The first time you play this mofo, you'll probably loop it three times in a row to make sure what you just heard was as intense as the initial impression it leaves. I did, and I'm a believer. One of the two members is in Brainoil, but Lana Dagales is more for the Hatred Surge and Iron Lung junkies. And, if you're at all turned off by their name, read this interview and it may change your tune. This 7" fucking shreds!!!


Get your new arsehole HERE
Posted by Batguano at 5:00 PM

Any band that puts out a split with Iron Lung is on my list of interests.

Does brutal even begin to describe this. Thanx for turning me onto this piece of LD I didn't have.

truth be told that´s the 1st LANA DAGALES stuff that really convinced me.

Hi (: Could you please upload it again? i'm dying to hear these guys

Hey, sorry for the delay. I refreshed the link to this EP. Enjoy!