"Make Sure The Machine Is On When God Is Calling" 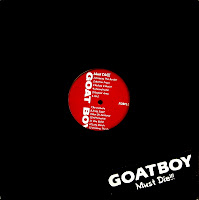 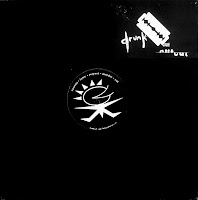 Every once in a while I seek comfort in a little melody, and this would be one of those days. Today's reason for singing is a split LP between Goatboy and Drunk. Ontario, Canada's GB start it off with a heaping 13 tracks of impassioned idealism in the form of melodic hardcore. Present on each track is a nice mix of snottiness and sincerity, which tends to remind me of fellow Northerners I Spy and Propaghandi, as well as other similar and obscure bands like The Krupted Peasant Farmerz and Quadiliacha. I didn't realize how long Goatboy has been around, but their discography cites their first sign of recorded life at 1990. I couldn't really say at this point if they're still active...
I dig Goatboy, but to be honest I bought this split because of Drunk-- a Norwegian rock-punk band of considerable brilliance, whose lineage branches off from such God-like entities as So Much Hate and Life...But How To Live It?. Sounding nothing like their forefather bands, Drunk's modus is a more refined form of rock, but the punk pulse cannot be subdued. Sometimes it remains below the surface, driving the slower tracks with a tense energy; but at other times ("Ransom"; "Murder") it runs the show, pushing the tempo into a punk rock frenzy, and arresting the listener with a crescendo of clean, driving guitars, salient vocal melodies, and poignantly perplexing lyrics. Being so used to rougher forms of rock, it took a while for me to adjust to the Drunk's medium. I'm glad I didn't give up, because it's pure genius! The band's exquisite (and sole) full length, "Company Tie," is widely available-- hopefully you will/have pick(ed) it up. And, if you haven't heard So Much Hate or Life... But How To Live It?, I don't know what else to say, but get thee hence and hence immediately! (You can also hear Drunk cover Leatherface's "Razorblades and Aspirin" here).
I wanted this LP to be ripped at 320 kbps, so I did, but it was ever so slightly too big. Therefore:
Goatboy Side
Drunk Side
Posted by Batguano at 6:40 PM

Awesome! i never did pick this up, despite loving what else i've heard from Goatboy.

That said, i can't seem to download this, it keeps giving me an error.....

4 Shared has been less than reliable lately, so I'm re-upping on mediafire. Should be ready any minute...

Thanks for the heads-up.