"You can get out of here, if you haven't killed anybody..." 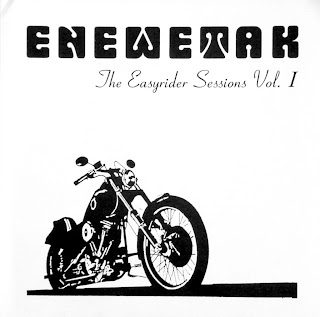 In case you don't have these six crushers, here's Enewetak's "Easy Rider Sessions Vol. 1" EP, revealing the band at its most "southern" (California?). Think Sleep's "Volume One"-era material, but more evil (ie. Eyehategod & Noothgrush!). The band's sound morphed at about three different points in its life, but the members seem very at home with these dirty sludge riffs. Lyrically, it's the usual topics: death, destruction, violence, and exploitation. One exception would be "It's A Small World After All," which, in no uncertain terms, bashes the idea of compensating descendants of slaves for the injustices against their ancestors. Oooo, controversy! I see their point, but I'm curious what spurred them to make a song about it. Anywho, this is a nice component to the sludge cannon, and for those who want more, check out Tafkata, another burly sludge beast formed by Enewetak personnel.

Goodness. This is quite appalling music. I love it! Your description totally got me. Sleep plus Noothgrush? Guaranteed awesome mayhem. I will be sure to return soon for the Valhalla lp. Much obliged for the obscure turn on.

Thanks for this! Amazing band! Seeing them live was a blast especially when they played with Gehenna! Some of these guys also played in a band called The Accident. They only released an 8 song CDR,not sure if this even made it out of Cali. As soon as I figure out how to upload it I'll contribute.

Paris- I'm not surprised that you dig these tunes. Hold the horns up high!

Salbert- Thanks again for the info. I am one of the unfortunate many who hasn't heard The Accident (band). If you can upload the CDr or something, that would rule! Let me know if I can help.

great shit! i love this stuff!!!

Remember when this record came out and asking about "small world after all". Lyrics were by Jack F (guitar)... they were young dudes from the suburbs trying to figure out what they believed in.

The Thing That Should Not Be said...

What the hell ever happened to Vol2?? And who are The Accident??

Not sure about Vol. 2, but I did run across some rarities which I hope to post soon. Apparently The Accident was a side project. They released a CD, but I never heard back from Salbert :(