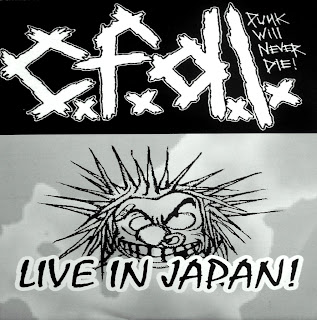 The words "live" and "bootleg" don't foreshadow much in the way of sound quality. However, the difficulty in finding any release by elusive thrash punks, CFDL, makes this live one-sided 12" quite a catch. Recorded on December 13, 1993, the 12 tracks herein reveal a young CFDL playing their guts out with only moments of massive feedback as reprieves from the raw thrashing turmoil. Some of their classics appear, including "Tofu Song" and "Religion Make Unhappy," a few of which were not yet released at the time of this recording (I assume... and yes, they play their version of Siege's "Conform"!). This is cool piece of CFDL history, which I hope someone else out there will enjoy.

Thanks! I have the CFDL/Hellnation split, and dig the CFDL. So you can be sure at least one reader here is with you on this one!