Song Of The Week: "Sore For Days" 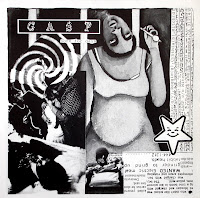 I could have chosen any track from Gasp's opus, "Drome Triler of Puzzle Zoo People," for this week's song, but I decided to go with the track by which I first came to know this twisted ensemble. "Sore For Days" is the title track to Gasp's demo, but I first heard it on the "Cry Now, Cry Later Vol. 4" 2 x 7" comp. I always eagerly anticipated its thick opening feedback and creepy opening voice sample more so than the onslaught of any other track on that comp. This is saying a lot considering Gasp shared it with the likes of Spazz, Crudos, Halfman, Noothgrush, Charles Bronson, and Detestation. It also, along with Noothgrush's track ("Gage"), afforded me my first hit of eye/mind-opening sludge (prior to that, my musical repertoire ranged from fast to really fast). So what you get this week is Gasp in its more primitive form. The structure is a little more predictable than their later tracks, but the bone-rattling discord and hair-erecting coldness is ever-present, not to mention the suffocating power. Gasp fucked up my musical world permanently, and I can't thank them enough for it.

You can probably find this comp in its entirety on several blogs, as well as Gasp's singles collection "An Earwig's Guide to Travelling."

"Sore For Days" (Ripped from the demo for that "authentic" cassette experience-- thanks to whomever I downloaded this from!)
Posted by Batguano at 8:55 PM

hey, any chance this could be re-uped? thanks.