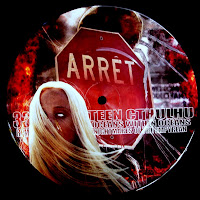 I was pleasantly surprised to find out how many FE friends enjoy Wormwood as much as I do. So as not to keep you waiting too long for more from these sorcerers of despair, I offer you their limited split picture disk with fellow Northwestern Metal alchemists, Teen Cthulhu. To be honest, I'll pick up anything by Wormwood, as long as it isn't at some crazy collector price. It doesn't hurt that the track provided, "Released From Expectation," is quite possibly the band's most deeply penetrating song. Words will inevitably collapse in weak-kneed admiration if any attempt is made at describing its power. Three years later, it would grace the grooves of the Starvation" LP. Brilliant, no matter where it appears.
Teen Cthulhu have made friends and enemies with their synth-laden horror-death metal-violence. I thought their LP was pretty fuckin' solid, and the two tracks on this disk are right along those lines. After that LP cover, the art submitted on this thing is a little lacking (just a humble opinion). Their two tracks deliver the goods, though, and for additional spankings, be sure to grab the band's LP and split with Iron Lung here and here respectively.
The Wormwood/Teen Cthulhu split pic disk
Posted by Batguano at 7:53 PM

It's a shame that Teen Cthulhu didn't stick around for longer as their LP is a classic. I agree about the artwork . . . maybe picture disc's in general leave a bad taste. Thanks though, my Wormwood needs are now complete!

Yeah, another TC LP would have been nice. I gave Book Of Black Earth a chance, but they haven't grabbed me where it counts yet.

Thanks for posting this! Always nice to have mp3s of my vinyl.