Apeface are, so to speak, the missing link in the extensive catalogue of NorCal/Bay Area hardcore documented on this site. I don't know why it took so long to get this post up, but after a little nudge-nudge from Rygar and Mike, the compressed goods have finally arrived. Before the message-board punks shat out the term "neo-crust," bands like Apeface were ornamenting their hard-line political punk with the "emotive" tendencies of more modern bands they'd probably rather not acknowledge as influences. Expect no flaccid indie rock crossover here, though: this is furious hardcore but with fairly intricate interplay between the guitars and bass (nods to Econochrist are not subtle). I tried to gather everything the band released, but I'm not exactly sure how successful I was. Below you'll find links to their 12", their tracks from the Zero Hour split, the entire Lemming split 7", and an additional track they put on the "America In Decline" Comp. If you haven't downloaded the "Shit Gets Smashed" comp, there are a couple more Apeface tracks thereon, along with some other comtemporary Bay Area sweetness. Alright, enjoy; and if I've missed any songs, let me know. 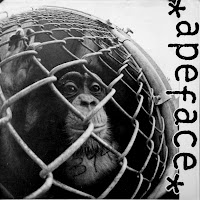 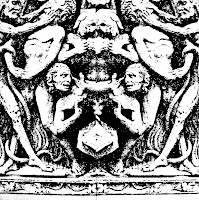 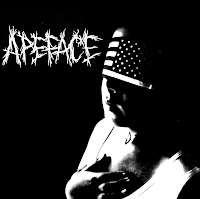 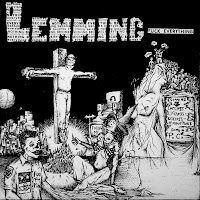 The 12" and split LP tracks plus a bonus comp track

yet another great post! Farmhouse has really put out some good overlooked records throughout the years. I fondly remember that band Red#9 which might have been Farmhouse's first release . . . I wish I still had those records.

Yes! Thank you. The Zero Hour split finishes their catalogue for me. When the s/t 12er came out, I started on my way down a different musical path than my friends. None of them could stand the fact that the vocals are practically unintelligible. But these guys had something really special about them. I lost the giant gatefold poster/sleeve, which sucks, but it's just paper, right?
My favorite Apeface show tool place at the shitty teen center behind my former high school. They had some desecrated nativity scene light-up statues (inverted crosses, blacked out eyes, pentagrams). They killed the lights and just had these little 3' blasphemous x-mas ornaments lighting the room. Talk about ambiance. I went by their house in downtown San Jose a couple times, and drank some Shaeffer & Sons, and hung out. Cool guys. Thanks again, homes.

new one for me, thanks

Hey Mike,
Yeah, Farmhouse and Stinky Feet hold a special place in my collection. I only recently heard of Red #9, so I'm totally on the lookout for them.

Ry- No problem, buddy. Thanks for setting the stage for the Apeface show, since I never got a chance to see them. And this isn't the first I've heard about the band's down-to-earthness. Enjoy those split tracks; sometimes I think they're better than the LP ones (not always, though).

My pants just got all tight in the crotch, thanks buddy...

Interesting note: Apeface use the same Barfly sample as Ojorojo, "Some people never go crazy..."
Apeface are so fucking good on that split, thanks for the tenth time.

Ahh, Strangeranger... I can always count on you to fill in the gaps. When it comes to slightly obscure bands like Apeface, I get a little retentive. Thanks for your help... you rule!

great band!i already had their 12''but had no idea they had released more stuff.thank you Batguano for filling the gap.