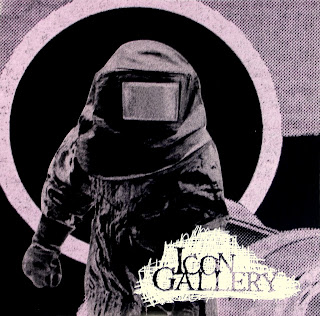 I was all ready to post Icon Gallery's "Demo" 7", but then they re-pressed it. A SOTW post shouldn't hurt, though, and the honor is one I give not begrudgingly, but rather proudly! This EP just kicks so much ass! I "discovered" the band while doing research for the Aphasia post (2 members in common), and was floored. The band cites influences from Prince, Post Regiment, Heart, and Iron Maiden. Sure, okay. In a weird way, this makes some sense when you hear the tracks. The first comparison I wanted to make was Signal Lost meets early Sonic Youth. That falls short of the mark too. Whatever description you decide on, let it be known that the band churns out some fiery rock that is soooo punk, but yet soooo much more. The musicians play with gusto but, as with Aphasia, the vocals steal the show. Such a great 7", and "Retribution" is beautiful example of the band's energy and edge-of-the-seat songwriting. I was a little disappointed in the IG's newest 7"; it's a bit polished with a poppier edge to it, and I can only hope that next time they return to the foundation set down by the demo.

"Retribution"
Posted by Batguano at 6:45 PM

fucking love these guys. pain has gotta be my favorite song from them. hope they put out a full length some day