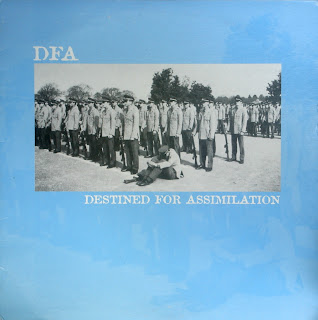 So I hear you like thrashing-mad hardcore played with precision. I also hear that you like to be able to understand what hardcore vocalists are saying once in a while. Well, so does Lardass, and so do I. In case you've been noticing a void in the above areas lately, DFA might be the remedy. The band plays fast songs, but isn't trying to break any records. Just fast, like the 80's crossover bands they obviously love. I can't say that DFA bring anything terribly new to the style, they just nail it with an intensely youthful zeal, and baffling tightness.

Six Weeks Recs. released DFA's follow-up 12" and I know they did a split 7" with Under Pressure. If there's anything else by them, I haven't run across it yet. The 12" below, "Destined For Assimilation," is their first and was released by Ugly Pop. UP doesn't do re-presses anymore, so this will probably be unavailable for some time at least. You may notice some noise on the first four tracks, because whoever owned this before me must have done hand-plants all over side A. The side B rips are of much better quality.

Great band, great 12". I know they did a split Ep with Bones Brigade as well.

Oh yeah, maybe I did hear about that 7". Thanks for the reminder!

I agree with you about this 12"... unfortunately, only like 5 other people are with us on that (download stats). I don't get it; their loss.

I love this! Thanks again!

Great band. They had another 12" on Six Weeks, but like MDC they changed what their acronym stood for on each record. That one is "Defy False Authority."