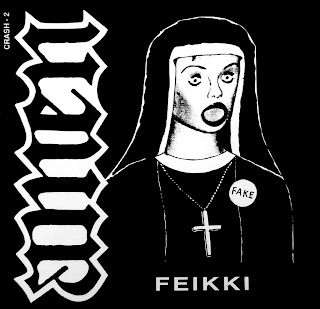 Amen is a band that should be mentioned along side Doom, Hiatus, and Disrupt during any conversation about nineties crust. Unfortunately, they aren't (at least not here in North America). The even sadder thing is that next to those bands, the Amen experience can often times be even more enjoyable. I'm lucky there's an entire cyber world between us, because some of you probably want to throw something heavy at me for my heresy. It's just an opinion, take it or leave it. The "Feikki" 7" was recorded in 1991 and released on Crash Mag Records. It's solid as fuck, from the art down to the riffs. If all goes well, I'll be posting a certain other Amen split sooner or later this week.

Blasphemer! Nah, I'm kidding. I only heard of Disrupt a couple years ago. I worked at a killer pizza place in Minneapolis where there were a couple crusties, a couple metalheads, some straight-up punkers (sorry for the labeling). My point is, I got to hear a good variety of punk and hardcore that would have otherwise flown outside my radar. Every morning this Brazilian guy would have the most punishing, kick ass hardcore for us to wake up to (Disrupt, Anti-schism, Agothocles...) Nowadays, it's the blog soldiers who help me out with finding truly awesome shit like this. Thanks.

well, i d like not to throw but to pass a bottle of beer to you because of this :)
cheers

So true! It is so hard to find any awesome metal bands anymore in the U.S. Seems all the hardcore is coming from Europe.