Song of the Week:"Left Hand" (Envy) 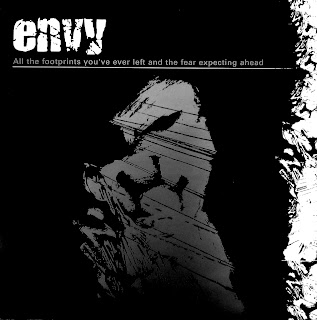 I remember when Envy was still somewhat of a hardcore band. It was during the transitional phase that I first found them, with the release of "All The Footprints...". Screamy hardcore was getting dull and redundant, but Envy wasn't about to fall into that trap. Their hardcore was indeed emotional, but there was still a raw fury backing each song, and the emphasis was on the music, not the hairstyle. "All The Footprints..." is a great album, and to a certain extent there is greatness on all of Envy's releases... just not nearly in this high a concentration. Level Plane had a hand in releasing it on CD, but "Left Hand" was ripped from the LP version put out by H:G Fact and Molaire Industries.

envy is something like phenomenon for me...
they are equally great as screamocore band (all the footprints era as much as post-rock with vocals (later releases, dvd included)..
seeing hardcore bands make themselves rediculus through thrash metal transformation (for whom the bell tolls?) envy is a perfect example of great "artists"

As for the stuff that they pulled off later, it was fucking awesome because it wasn't pretentiously epic like most stuff of the sort, but stripped-down and sincerely pathetic. I guess I usually hate that kind of shit, too, but I can't not appreciate (<3) Envy.

to put it simply: old envy was godlike and new envy makes me wanna take a nap. a cage it falls into offa All the Footprints... is prolly my favorite song by these guys.

Hey everyone, thanks for sharing the Envy worship! I think I could have done this post on "Mystery and Peace" or "Light Of My Footprints" and it would be just as meaningful to me. Or any other song on the LP for that matter. So good.