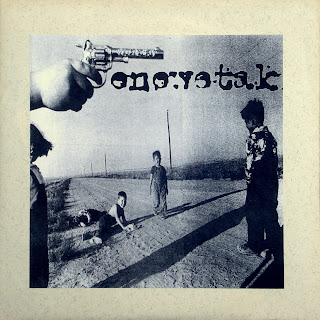 When I have the time, I don't have the motivation, and now that I have less time... The only way to solve this blogging dilemma is to unload a nice, quick EP on you. A good chunk of Enewetak's discography is all over this site, but what is this "Dead Bird" 7"? It's about what one might expect from this band as recorded by Matt Anderson in 1995, ie. it sounds a little more "Gravity" than "King Of The Monsters." The post-Rorschach menace is still worn sleeve-wise, though, and the band's chunky, metallic destiny is clearly visible on the horizon. The actual record's history is a little foggy-- we know that it was released on Revolutionary Powertools Records and came in a sealed envelop-sleeve, but just how many were pressed, I cannot say. Having almost never seen this thing around, I'd venture to say it falls into the rare as fuck category.

R.P.T. was the label done by Mike Cheese a.k.a. Mike Apocalypse (GEHENNA's vocalist) and I couldn't name just only one bad release in the label's discography.

Hmm. I didn't know that for sure, but it makes sense considering the time, place, and style. Thanks Pope.

All Out Ward said...

Do you have any Tafkata?

I've got the LP. If it's out of print I'd be more than willing to post it.

I do know for sure cause I asked Mike himself not that long ago about R.T.P. and I also got R.T.P.-001 which is GEHENNA's demo tape.

Can you post this one again? The link is dead.

Alright, it should work now. Thanks for the request.