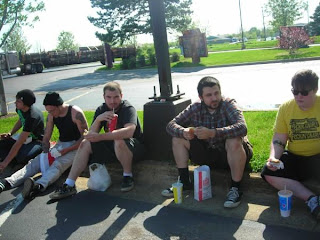 It's time for a couple more demos, the first being from Sawchuk-- a young Michigan band that's going strong (with the next featured band, such is not the case...). Matt from the band noted that Sawchuk isn't typical of the bands FE usually features, and in a way he's right, but not completely. I can always appreciate bands that draw inspiration from hardcore's heyday, and this band certainly does so with the "crew" styled backing vocals and old-school-gritty midwest-meets-east-coast barrage. I can discern a small influence from the more modern straight edge bands of recent times, but its subtlety in the mix is certainly an asset to the final impression made (at least to this blogger's ears). The final impression would be that Sawchuk is a solid hardcore band, and regardless of the listless recording quality, the band's power and heart shine through each of their raging tunes. I was a little skeptical when I saw titles like "Rust Belt Pride" and "Stand And Fight," but exploring further I found the lyrics to be quite thoughtful and at times moving. I look forward to these guys getting a decent recording budget and steady line-up, 'cause their next release will probably be a killer!

Check out the Sawchuk Myspace page for another download and show dates.