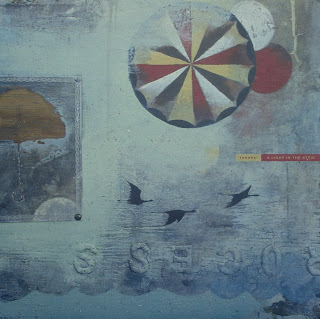 What would happen if members of Yaphet Kotto and Suicide Nation got together? Besides an excellent split 7", the answer would also include A Light In The Attic. Silverstein reference aside, LITA was an impressive, ephemeral musical event that fused the respective emotion and metallic brutalism of both bands, the congealed result of which sounded like neither. Now, I'll admit, their tracks on this split LP are not exactly their crowning achievement. I suggest approaching them as preparation for the Takaru tracks, or for the much superior ones that appear on their own LP (shall I post that tomorrow?). The Takaru tracks are indeed fine examples of what this band could do. If you're one who finds some qualities of "screamo" redeeming, but prefer some metal chutzpah (balls) placed heavily in the mix, you'll appreciate Takaru immensely. I want to say they have connections to Burial Year, but I lost track. This is a blog, though, so if you know more about Takaru or this supposedly rare split, you should try commenting. You'll feel good about it afterward. Trust me.

Hey Chris... anytime! Glad someone else likes this stuff too.