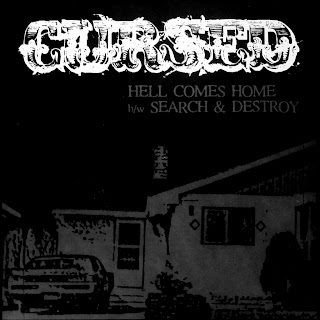 Why did Cursed have to die?! The three excellent full-lengths were satisfying indeed, but imagine three more! Such is life. The 7" of the day may be only two songs long, but they are two rip-roaring examples of what this band was made of. One's a feisty original, and the other's a ball-kicking hardcore version of The Stooges' "Search & Destroy." The latter track was compiled on an old mix tape I did, but I had to put it on here again because no one downloaded that thing anyway, this version is so damned good, and this time it's ripped at a better rate.

It's a shame Cursed had to break up. I'm convinced their next album would've been a masterpiece. But I guess some things weren't meant to be.

It's nice to see another blog with the same irrational love and devotion to Cursed as mine. Want to do a link trade? Let me know.

I feel lucky to have a support group to help me through this difficult break-up! Thanks for you support, guys.

No Funeral- a link trade is a great idea. So good in fact, that... you are linked, sir!

Love the Stooges, love Cursed; that cover just made my morning- thanks!