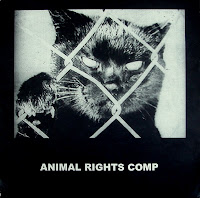 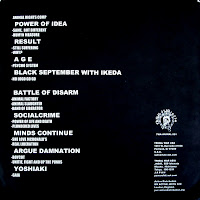 Compilation madness continues with this full length gem brought to you by Tribal War Asia. "Animal Rights" (1999?) assembles seven of Japan's ragingest crust-mongers, and two others who employ a "lighter" approach. There are way more hits than misses on this piece of work, including but not limited to the thrash metal attack of AGE ("Psycho System" appears on their "4 Wings" LP), the classic crust barrage of Battle of Disarm, and the '80's keyboard-embellished punk assault of Argue Damnation. Really, though, all the other bands will make short work of pummeling the shite out of you too. Of course, all good comps should have some variety, so at the end of each side there's a couple of non-hardcore acts. Black September with Ikeda crank out a swanky yet socially conscious progressive-lounge-funk (or whatnot) track that may appeal to fans of The Big Boys and/or Guts Pie Earshot, and to conclude the show Yoshiaki belts out an acoustic number that sounds at once like your roommate singing in the shower, and then at times like an animal being tortured (maybe that's the point?). I still think it's a great way to end this inspired comp. When I picked this slab up, it was not in the best shape, so the sound quality is a little blah blah blah ... but, oh well, what can you do?!
Download
Posted by Batguano at 6:47 PM