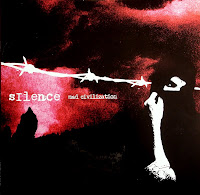 This band's name reflects the amount of comments I've been getting lately (ha!). Silence is, really, a mournful, crusty hardcore band from Poland. Call it neo-crust, drama-crust, emo-crust (actually, don't call it that)-- I call it good hardcore. Each track on their "Mad Civilization" 10" (Les Nains Aussi, 2004) is out to wrench your guts and emotions thanks in large part to the darkly discordant guitars, hoarse screams, and on a couple of tracks, piano and violin. Most tracks reach hardcore-level speeds, but many slow it down in order to drag the listener through some serious emotional beatdowns. For lack of any better comparisons, some reviewers were hasty to foist Silence into the "Tragedy-esque" category. This is fair in terms of sub genre placement, but their tactics/techniques are more akin to Remains of the Day, Fall of Efrafa, or even Jeniger. In some ways, this is my favorite Silence release, although they have been busy in the last couple of years releasing some really excellent pieces: this 10", an LP, a split LP with Easpa Measa, a 7", and a split 7" with Burning the Prospect (probably a demo too, but I haven't seen/heard it). Of all these releases, the 10" seems the most difficult to find lately, so here you go...

"Mad Civilization"
Posted by Batguano at 9:38 AM

all of these files on badongo dont work for me. i click the download link and it says- Link incorrecta!
wasnt mediafire working fine?
besides the download issues, nice blog!

Hmm. This is the first problem I've heard about with badongo. The download link for this post worked for me when I tested it. I will go back to mediafire, though since they are pretty reliable. Anyone else having trouble?

Fuck it. I re-uploaded the last three posts onto mediafire. As far as I'm concerned, if one person is having problems, then badongo can shove it! I'll continue to convert previous files too. Thanks "anonymous" for lettin' me know about this.

hey, how i missed this before? need to check the back pages.. :)
Thanks Batguano, great band, they incl. members of Antichrist.

Yes, I love all their recs! Antichrist is great too. More straight forward, but equally pissed!