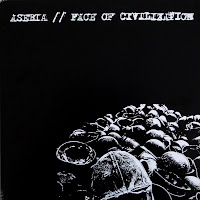 If your addiction to dark, metallic scandi-crust is as insatiable as mine, this may be the fix you've been scrounging for. Asebia sound like Swedes, but are actually Danes. Their "Face of Civilization" LP was released by Plague Bearer Records in 2003 and went fairly unnoticed in North America (as far as I can tell). It's too bad, because this is some excellent, world-class hardcore that could easily hold its own next to Skitsystem, Kontrovers, or Acursed. Asebia use speed generously to convey their fury, but keep each song interesting with tense intros, and slow interludes, many containing some evil black metal-type guitar picking. In addition to being sonically riveting, the lyrics are amazingly literate and thought-provoking (especially considering that they are mainly in English and the band is Danish). Themes cover a variety of topics symptomatic of our post-industrial predicament, including class exploitation, the dilemma of "freedom" for citizens of more more privileged states, and the anonymity of mass economic murder resulting from globalization. I've posted a photo of the lyrics from the back cover below if you're interested.

another excellent record i missed before...
thanks :)

I've got the cassette version of this LP, do you know if it came at the same time? Or is it only reprint?

The cassette got made on the polish/german tour to give people a chance to get the as cheap as it gets. Every night 10 or so copies got made.

Thanks, Jim. I wasn't sure how to answer that one.

No worries Batguano, Nice to see people dig the Album and still are able to get it free

As usual, Jim is a bit in the woods! That tape was the demo. We did a cassette version of the lp maybe a year or two later. There was alot of hassle about the printing I remember. Still don't think I got the tapes owed to me.