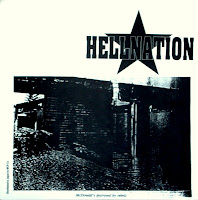 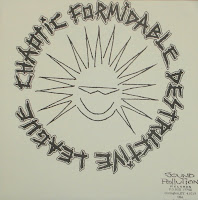 Sound Pollution Records has always been a reliable source for international fast-as-hell music. Around the time it teamed up with MCR Company, it was an especially good resource for Americans hungry for Japanese noise that fell on that side of the musical extremity spectrum. The split presented here is a great example of the label bringing two bands from opposite sides of the Pacific together. Hellnation should be legendary, but unfortunately are only mentioned cursorily in discussions of powerviolence and "underground" grindcore. Founded in 1988 by two Kentuckians (including Ken Sound Pollution), the band would go on for years producing an impressive body of grindcore, spear-headed by high-pitched, screamed vocals. The production was often fairly clean, but the band managed to appeal more to the hardcore crowd than the metal. Besides their choice of chords and song structures, part of this allure was in the straight-forward social/political lyrics that never shied away from calling out idiotic behavior within the "scene." On their side of the split, they take on, among others, sloganeering crusties, as well as the whole PC nonsense so annoyingly pervasive in the '90's. These dudes didn't care who they pissed off! Hellnation gives us five songs on this one, and although that's a lot for split, I am left wanting even more! CFDL (Chaotic Formidable Destructive League) take the wheel for Japan and, although not as ear-shattering, do the job equally well. There's a little more of an old school punk feel thrown in with the fastcore, and the vocals are a little easier on the ear as well. Only two of the four CFDL tracks have lyrics provided, and after reading them I truly believe that most bands should just write their lyrics in their native language. Anyway, the band's recordings are energetic and noisy- which is what I always look for in Japanese fastcore. At the time of this release (1996), the band had already broken up, but they reformed recently. Check this little record out!
Download the Split
Posted by Batguano at 9:26 AM

CFDL RULES! I had actually forgot about them being on the comp you posted above, weirdly.

Great fucken blog too, yours.

Very nice, thanks! I'd been wanting to hear Hellnation.