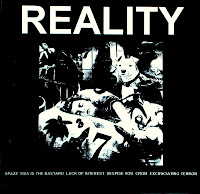 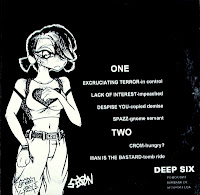 Arrgh. 7" Compilations. They're over in a flash, and before you let them sink in, you get too lazy to throw them back on the turntable. Doing this blog has really forced me out of my aversion for this comp. format, and allowed me to dig up and appreciate some of the better ones. I'll be posting more "volumes" of these comps here and there for the next couple of weeks...
Volume I is the "Reality" comp. released around 1994 on Deep Six Records. This would be the first in a series of numbered "Reality" comps that would appear in full length editions for years to come. Number One here is no sloucher, and showcases some of the most brutally violent bands the LA area had to offer at the time (the only exception is the Bay Area's Spazz). It's hard to pick highlights, because all the tracks kick muchisimo ass! For a full track list, click on the back cover photo up top. The Man is the Bastard track appears on the already-posted "Anger & English" comp, but this is a rough, live version that has its own distinct character. You can download this ep right....Here!