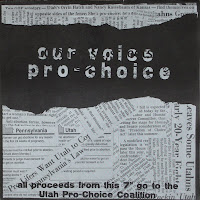 The "Our Voice Pro-Choice" 7" (Hands On Records, 1993) consists of half Utah bands and half non-Utah bands, and was a benefit for the Utah Pro-Choice Coalition (they probably needed all the help they could get!). As you can probably guess, the Utah bands are virtual unknowns (unless you're from Utah?). However, the two out of state bands (Born Against and Heroin) would become quite influential within the nineties modern hardcore pantheon.

1. Anger Overload- "Waiting." I have not heard anything else by this band, and I'm not sure I would want to. They played metal with hardcore leanings that just doesn't do it for me.

2. N.S.C. - "Choice No Choice." NSC play old school punk not unlike The Avengers. Their track is not original, but still quite good and catchy.

3. Born Against - "Resist Control." BA need no introduction. "Resist Control" is a good example of their earlier, more straight forward material. This song is also compiled on their "The Rebel Sound of Shit and Failure" singles collection, and was originally a Life's Blood song. As the story goes, the release of the "Our Voice" comp. was delayed due to Sam McPheeters "misplacing" BA's layout for the insert behind his stereo. The comp. was thus completed after Clinton was sworn in, making the Bush Sr. imagery dated even for the record's own time of release.

4. Heroin - "Comes to Mind." San Diego's seminal gods of emotional and chaotic hardcore offer a very early track. If memory serves, this track did not make it onto the Heroin discography. While not as good as the band's later work, it is still great to hear this one... a real piece of modern hardcore history!