The Ejaculation Of Serpents 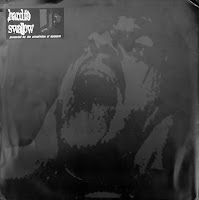 I was reluctant to post the Hard To Swallow LP "Protected By The Ejaculation of Serpents" because I assumed the tracks were on their Armageddon Records CD. Luckily commenter XyosefX set me straight; I'm not too into CDs, otherwise I would have known that it only collects early EP tracks and such. So here it is... eleven blows of brute-force nihilism from one of the more underrated UK bands of last decade. By the time of this LP's release, H2S had beefed up their bass and guitar density and sickened their vocal style to become an almost full-fledged grindcore band. Those hardcore nerves are constantly exposed, though, and if you can imagine the burliness of Citizens Arrest, mingling with the cold, forlornness of Counterblast, and garnished with the dissonance of Discordance Axis, you may have an inkling as to the enigmatic yield reaped by these brits.

Household Name Records was wise enough to remaster these ragers for that anvil-around-your-neck heaviness. The LP still appears in their webstore, so maybe they have some copies left (doubtful, as it was released in 1999 in a pressing of 1000?!). If you're in the UK, hit 'em up!

Do I detect a Wicker Man Reference?

Probably. I'll have to do my homework and get back to you on that!

Hey, Capt., I started a blog of my own today. Added your link. Check it out sometime, and let me know what you think. Thanks.

hey thx for this.
adding another band to my england rooster beside ripcord,heresy,napalm death,the stupids,etc....
not to forget iron maiden hahaha!

do you know if someone (gord?) from geriatric unit played there?

As a matter a fact, the bass on this LP is credited to Gord! I totally missed that!

I'm assuming you checked out the Iron Maiden pisstake design on the record labels?

yeah the labels are great!

Some other great UKHC bands of the past (mostly 90s) include:

Hey, thanks. I've heard more than half of the nineties bands, but almost none of the contemporaries. Hopefully Chris will also read this list. Thanks again!

Alrights Guys
you are indeed correct about the Wicker Man reference, infact there were WM samples on 4 HTS releases.
HTS line up was as follows Gords Bass,Sean Dugan Guitar, Jim Rushby Guitar, Justin Greaves Drums, Goy Vocals & Bloody Kev (me) vocals.this line up recorded:- Demo,1st & 2nd 7".Means to an end comp,Caught offside comp, best of the 1in12 comp,Wear your smell comp,all on the armageddon comp and also the cd version of protected.
The Protected line up was the same except Goy had left, so I did all the vocals with a tiny bit of backing vocs by Jim and also Johnny Morrow (RIP) of Iron Monkey did 3 songs with me.
After this Peet of Underclass joined and we recorded a split cd with CANVAS and a live 10" .
We split NY eve 1999.
Peet went on to The Devils then Narcosis, Jim Armour Of God then Geriatric Unit, Sean Armour of God then Varukers, Justin Electric Wizard then ???, Gords John Holmes then Geriatric Unit, Me Helvis,Dead Inside,Wives of Seth, Shackle me Not,Ray Reardon Youth, Raging Speedhorn, Spectra Hawk.
www.myspace.com/hardtoswallow

When I started to explore the band's lineage, I started to become kind of dizzy. Thanks a bunch for clearing all that up, and for stopping by!

Theres still a few copies of the protected... 12" available from household name, I just had one delivered (again) about 6 weeks back

Can you please re-up the LP. It seems impossible to find the remastered vinyl version ripped.
Thanx in advance.

Hey, sorry for the delay. I decided to re-rip the LP for slightly better sound quality. Check the link... it should work ok now. Thanks.