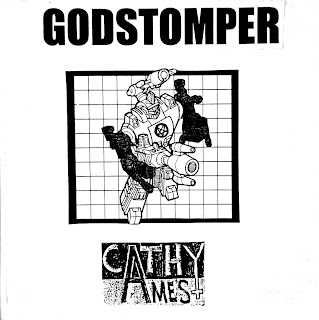 This blog may not get an excessive amount of visitors, but the ones who do stop by tend to be awesome individuals (or so it seems from here behind my desk). Two bands I hope to post this week were brought to my attention by a couple of these music-enthused passersby. The first band is Cathy Ames, who were recommended by Rygar (Ryan), who, incidentally, started a blog recently. He's a gifted wordsmith and posts bands that aren't the typical fare on all the crusty hardcore blogs. He's also looking for a job, so go over there and hook him up and leave lots of nice comments. But I digress. Ry mentioned the band when I was posting one of my favorite sub-sub-genres of music: dark and crusty hardcore with cackling banshee-ass vocals (often provided by a member of the fairer sex). Cathy Ames isn't quite that dark, but they certainly meet all the other qualifications. The three tracks herein shred pretty hard, and Fenny, the vocalist, belts out some real blood-curdlers. All searches for more CA releases have been fruitless. If you know anything else about this band, there are at least two people who would love to hear it.

Then we have Godstomper, who may not rival Agathocles for releasing split 7"s, but they hold their own pretty well. Being a bass and drum sludge/grind band, I am forced to throw in an annoying reference to MITB. If you prefer Lana Dagales, then, sure, go with that. Anyway, the six tracks on their side are heavy and raw. As a matter a fact, there's a noticeable rawness to the whole release, which was put out by Paul Barfo's (Godstomper) label, Cesspool Records. The "cover" is a two sided photocopy with no lyrics, and the recording is rough to say the least. But the music is what matters most, so see what you think...

Damn, thanks boss. Two links to my blog in one paragraph! I appreciate it, a lot. I do still own this record, but my turntable bit it a long time back. About Cathy Ames: Their side was recorded by a friend's brother, Jimmy Erstead. I guess he lives here (L.A.) now and works in sound for movies. I've been trying to get in touch with him for more info about CA, because I know they were good friends. His sister even had a pig named Fenny. The only other release I know of, and I also have, is the "Artificial Something" comp. 7" They have one track, which is on the b-side of the record, which plays from the inside, to the outside edge. Pretty neat trick. Also, at one point, they were supposed to put out a split 12" w/ Noothgrush. I don't know if it was only an idea, or if the recordings are out there somewhere, just waiting to be discovered (Let's hope.)Before they split, they replaced the guitarist with some very metal looking dude, and their sound got a bit darker, and they added some impressive leads. That's about all I know. Thanks again.

i'll take your introduction to this post as a compliment hehe.

Rygar- Getting started with a blog is a pain at first, so I was just trying to do my small part to help. And wow, you had a lot more info than I expected. Thanks. That Noothgrush split would've been the shit!

Mr. Approach- Yes, my intro definitely applies to you!

Haha. Yes! Someone give Rygar a job! NOW!! kthanx.

Thanks, and a belated happy birthday too!

Zmaj- your welcome and thanx!