This Is Helsinki, Not Boston 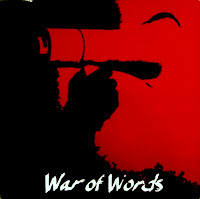 You listen to entirely too much hardcore and grindcore (and other genres ending in -core). As a result, I shall be forced every now and again to give you a little injection of melody to break up all the screaming and yelling. So drop your pants; it won't hurt a bit. As a matter of fact, I think you'll like today's prescription: the War Of Words 12". These Finns (don't confuse them with the Bostonian band of the same name) did time in Diaspora and Life's A Riot, and will definitely appeal to you if you're partial to bands like Imperial Leather, La Fraction, Happy Bastards, and Signal Lost. Weaving in and out of the mid-paced punk explosions, you'll find soaring bass lines that give the tracks a "California" feel; but the first thing you'll notice I think will be the vocals. The young lady vocalist is especially noteworthy, alternating between slightly harsh shouting, and downright lilting melodies. There are a few somewhat saccharine choruses, but the greatness of the rest of the material counters that nicely.

If you own a turntable, have some extra cash, and find that you like this record, please help out either Crimes Against Humanity Records or Puke 'n Vomit Distro. I think these two outlets have some of the last copies of this disk in North America (only 500 were pressed). CAH Records is struggling to survive, so head over there NOW and throw some scrilla his way (there's even a sale going on). Download blogs get a lot of shit for taking away revenues from labels, but I'd like to believe we actually help their sales. Prove me right.