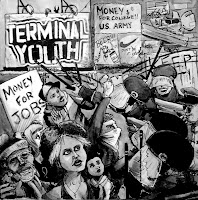 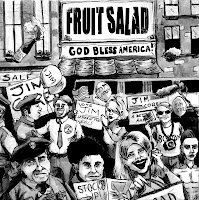 Busy, busy. This week seems never-ending, and this daylight savings shit isn't helping! I've got a four-day weekend coming up, so hopefully I can set aside some time to rip some good stuff for next week. Meantime, here's a split 7" of some more Terminal Youth ripping it up with fellow Mass-holes, Fruit Salad. A few of you out there apparently dug the rip-roaring Terminal Youth 12", and on this platter you get more of the same speedy goodness (minus a significant amount of fidelity in the recording). Among other things, the lyrics deal with the patriotic hoopla surrounding the "War On Terror" ("Don't Step In The Nationalism") and the undeniable suckiness of marketing sensation, AFI ("SOA Not AFI"). As before, these gents ain't fuckin' around!

Fruit Salad don't appear to be the next "queercore" darlings as their name might suggest, but rather the next band in a growing line of grinders with decidedly anti-macho names. Cool by me! There's also a surprising humorlessness in the lyrics, which deal with their staunch support for direct action as well as their life-long devotion to being punks. The shoddy production works well with their gritty punk/grind, except for maybe the drums (sounds like he's banging on some kind of atonal vibraphone instead of a snare). Unlike Terminal Youth, Fruit Salad are still a band and have just released a 7" on Teenage Disco Bloodbath. Support 'em if you've got the cash.
listen here
I'll have a pic here of the lyrics as soon as I have time to take pictures in actual daylight.
Posted by Batguano at 7:26 PM