Song Of The Week: "Inspiration" (Crimpshrine) 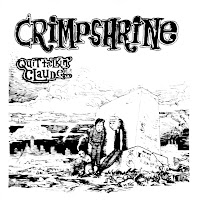 It was 1993, and Jawbreaker were about to play this outdoor gig at a kid's amusement park. The only thing more intriguing than this were the scummy punks with Crimpshrine patches on their tattered jackets. Who is this Crimpshrine? Such a strange and cryptic name; such a crude and inornate logo... I had to find out. Weeks later I would, and my outlook on life would never quite be the same again.

So, yes, Crimpshrine was a punk band. But for me, it isn't as plain and simple as that. They were a small group of people, who rebelled against the rebels. In a time when it was fashionable to say "Fuck you, I don't care," Crimpshrine had the balls to say "Fuck you, I do care." The concrete spires were rising up around their native Berkeley, enshrouding their world in a cold, cynical malaise; but these naive guerrillas somehow found the unction to breathe warmth and hope back into the ruins of all that used to be meaningful. Hiding and thriving in the dark crags of their fallen home, they were hellbent on teaching us how to be human again.

I would go on to listen to "Duct Tape Soup" more times than any other album. The band's power, artful simplicity, and sincerity can never quite be matched. When I find myself entering into that cold, cynical place, I look to Crimpshrine. Of the 30 or so songs I was tempted to choose for tonight's post, it was "Inspiration" that seemed to sum up what this band means to me. It appeared originally as the last track on the "Quit Talkin' Claude" 7", then (fittingly) the last track on the "The Sound Of A New World Being Born" collection. All the suffering and deliverance this band conveyed throughout their life is contained in this little song, from the bluesed-out lead-up, to the fiery punk crescendo. I can only hope that this band inspires you half as much as they do me.

Negativity's too enchanting
Cuz the world seems so depressing
But I know it can't always be that way
I get caught up in my situation
But I know my life's just begun
We all need...

I can see the world falling to it's knees
Screaming "Please someone help me"
Now I can see, we've destroyed ourselves with certainty
And this machine will crumble and fade
To a hundred million miles away
Where there's someone just like me
Thinking everything will be OK

From a hundred million miles I can see a man
And I know he understands
Saying your chains are your own
It's your mirror, so smash it.
Posted by Batguano at 6:48 PM

I agree 100% about this song summing up that band. Ah the memories. My brother and I used to play this 7" over and over. I freakin' love their stuff... nice pick.

Oh,yeah this band had great lyrics :)

Once again your song of the week has been an "inspiration". Saw Crimpshrine up in Humboldt with some of the other east bay classics (Op Ivy and Isocracy) back in 87, but I don't think I fully appreciated them until a few years later. Your writting really should not be missed though as it sets the stage so well for the tune. Thanx again dude.

Ahh, it's reassuring to know that this band left a lasting impression on others. Like certain smells, their songs are linked closely to many memories for me too. And yes, their lyrics, much like their music, were powerful yet simple. Naive and sentimental at times, but always very real.