Song Of The Week: "Fallout Of Our Being" (Nausea) 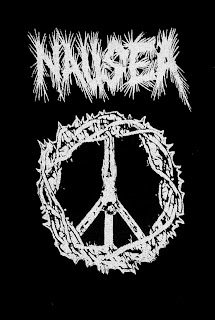 Whenever I post a compilation, I can always expect half as many downloads as usual. I guess I can understand that... wanting something more cohesive, etc. But I've discovered many of my favorite bands through comps... Nausea being the third Song Of The Week band for which this is true.

My introduction to Nausea was also my first glimpse at the stench filled bog we now call crust. "New York City Hardcore: The Way It Is" is admittedly an odd place for such a how-do-you-do. "Fallout Of Our Being" was nestled among a brigade of sportswear-clad straight-edgers and right-wing pseudo-skinheads. But in the late eighties/early nineties, I was (unfortunately) only acquainted with this New York scene, and a few other bands I love to this day, like Bad Brains and Agnostic Front. I remember seeing Nausea in AF's thank you lists, and that sparked the detective in me. Finding this comp got me a little closer, but upon interrogation, the clerk who sold it to me could direct me no further. The Nausea case would have to be left open for a time. 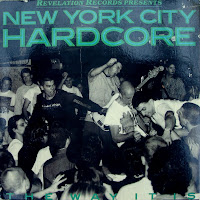 It would be years later when I'd finally discover that crusty beacon of light, Profane Existence, and Nausea's treasured gift to hardcore, "Extinction." Having now heard their discography numerous times, I can't necessarily say that "Fallout" is my favorite Nausea track. But its stomping d-beat power and bleak lyrics belted out so urgently and gruffly by Niel, knocked something into my head (or out of it). 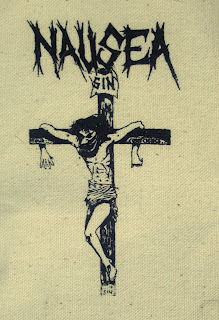 So it was through Nausea that I would get to know the classic UK crust and political punk bands. Now, looking back, Nausea seems like the Noah Webster of this genre, establishing the American crust lexicon, while still paying respectful homage to their forebears. Whether you agree with their politics or not, it's hard not to recognize Nausea's place in the hardcore cannon, and I personally can't help but regard them as one of the all time greatest bands of the genre.


"Fallout Of Our Being"


Are people really blind
or just absent of their minds
A continuous pattern towards
the fallout of our very being.

And when at war
Soldiers kill soldiers
It's man killing mankind
I ask you why, why must
life go to so much waste?
Posted by Batguano at 7:49 PM

I discovered this track on a compilation, too. Except it wasn't Nausea, it was a cover. It was on a No Fate Comp. (Vol 2?)I forget which band (Sorry). Anyway, I went out and got Extinction, as well as a live disc. This is the only Nausea track I listen to on a regular basis. I've been known to spit out out the first two lines at full ling power when I'm stuck in traffic , or in other stressful situations. Good times.