To The Holy Land Of Grind! 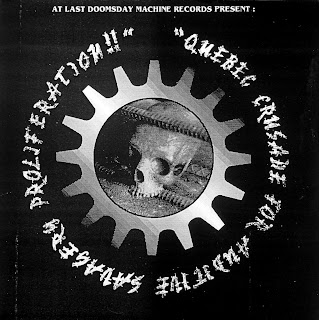 Who would've known that Quebec City in the early nineties was such the bastion of brutal crust/grindcore? I guess the easy answer would be the Quebecois themselves. I remember reading enthusiastic descriptions in DIY 'zines of Immoral Squad, Human Greed, Shitfit, and Global Holocaust, and, well, they're all here on the "Quebec Crusade For Auditive Savagery Proliferation" 7" comp (Doomsday Machine Records, 1994). So what's the crusade exactly? Besides steam-rolling your face with crude and ferocious tunes, the comp also tried to serve as a rendezvous point of anti-globalization solidarity for Canadian crust-types. For the most part, all the bands stay on topic lyrically, and musically the standouts are mentioned above, but I would add Drift, whose track is ten times more devastating than I remember them being in the past. Eight angry bands; nine angry songs. Fight The Power.

Get it (and don't forget to D/L the Immoral Squad 7" down below)
Posted by Batguano at 8:56 AM

Hey thanks again for the Rorschach CD
I lived in Long Beach around the turn of the Millenium. Do you remember a band named They Fear the Reclaim from that time period? where you in the area back then?
Anyway, I used to be sort of pen pals with the drummer from Global Holocaust and he couldn't be a nicer guy. I also got to meet Wag one time when he stayed at the Elm St house in Long Beach when he was touring with the Black Hand. His vocals in Human Greed are the fucking best................Troy

No problem on the Rorschach!

At that time I was already entrenched in the San Diego situation. I was finishing school and probably wasn't going to too many shows or leaving SD much. So, no, that band name doesn't ring any bells.

GH's vocals totally destroy! The Black Hand was great too, but I found out about them a little too late.

Only really knew one guy from san Diego. His name was Jason and he was in a band called Sascha who I didn't really care for. Nice Guy though. He had a bunch of One by One 7 inches he let me tape.....