I thought I had a firm handle of what the visitors to this blog like: straight hardcore and grind! But every once in a while, someone will contact me about the less aggressive bands I like. A couple of people now have stumbled upon FE by searching for the elusive Ottawa trio, Okara. I did a post during the first weeks of this blog, but did not post an entire record by the band. So this revisit goes out to Brian who reminded me that Okara was indeed awesome, more people need to know about them, and that an immediate repost is urgently in order! Below you'll find links to the band's discography minus one 7" that I'm missing temporarily. First you'll get their playful, dazzling, and perplexing LP, "Months Like Years," 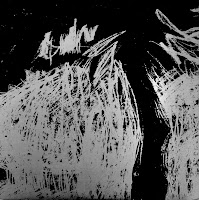 where the band shows itself in full control of its faculties and had the best production of its career (which still wasn't great, but it adds grit to an already heavy piece of rock!). Equal parts jazz, San Diego rock, and New Math, every track is full of hooks and grooves, but also a fair amount of nerdery. In addition, you'll also get Okara's split with Mothman, 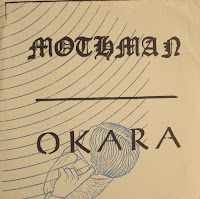 where Okara sound different than usual, but Mothman sound uncannily like Okara. Maybe the labels were switched, but a closer look reveals that the above conclusion is correct! Finally, I've included what I call "The Rose" 7", which I believe to be Okara's second. On it you'll find some of the best and darkest of the band's output-- four chilling tracks that render the poor production negligible. All three musicians are incredibly talented, but I think on all these records 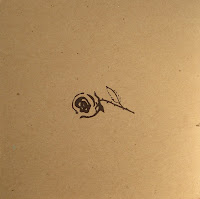 you'll find yourself drooling over the rhythm section's incredible precision and energy. If there's any interest, I may post some bands related to Okara, like Shotmaker, Three Penny Opera, and 30 Second Motion Picture, but we'll just have to see about that. If you're interested in vinyl copies of the LP and 7", try this distro, where you can also find out about members' later projects.
Okara LP
Okara "Rose" 7" and Split with Mothman
All ripped at 320 kbps with inserts, etc...
Posted by Batguano at 9:11 AM

I just listened to the preview tracks over on the Singbox, and these guys sound great. I'm just one voice, but I'll put in my two cents and say that I enjoy the variety. They remind me a bit of the Dismeberment Plan, circa "!". Maybe even a little At The Drive-In? Either way, I enjoy it, thanks.

I've never heard this before - it's absolutely amazing.

thank you, thank you, sir. very gracious of you for sharing these rare and amazing records. the rips sound great too! -brian

Ry- Your two cents is more valuable than the download stats since you actually take the time to leave comments. Thanks. And don't be surprised if you see at least a little more variety from here on!

YRFKT- I'm not a bit surprised that you dig Okara judging by your past posts!

Brian- cool, any time, man! I too was happy with the way the LP rips came out. If/when I get more Okara stuff, I'll post it, for sure. Let me know if there's any other rarities you'd like posted here!

i really like the few songs i've heard so far and indeed their rhythm section is excellent.on the subject of variety,count me in too.it's nice to mix things up from time to time.

thank you so much for posting these. im watching a video of them i made dec 31 95 right now. i have these records but i dont really have a good way of encoding them.

this band was so unreal live. the guitar player and his girlfriend walked from ottawa to the bottom of mexico after the band broke up... if that give you any kind of indication of what these dudes were like. yes, i said WALKED.

Thank-you so much for this amazing blog. I've never heard of Okara before today but I'm floored, the EPs are incredible.

LP link seems to be down...

Hey Pete... glad you like Okara too. I just tested the link and it seems to be fine now. Please let me know if it gives you trouble again!

Thanks so much for this. I'm from Ottawa and loved these guys in high school.

now that you have the digital download, how about picking up one of the 100 remaining copies of the LP from me!

I actually released the Mothman / Okara 7" on my label. Funny thing is I never really heard the similarity between the 2 bands until recently when I played this 7" for the first time in many years. I have the Mothman 7" I released also posted on my blog if anyone is interested.
http://rocketsciencerecords.blogspot.com/search?q=mothman

hey, it's matt from Okara. Thanks for this post, so cool to see people stoked on this stuff from so long ago, what i really wanna know is who posted above that they have a video from dec 31st??? there isnt much if any footage out there of the band, i only have one show from Jersey (maybe its the same as above?) but would love to get a copy, if that person sees this drop me an email at bloodmeridianmatthew@gmail.com thanks!

Saw this band play in Ottawa many times. One of my all time favourites overall and definitely my favourite drummer of all times Mr.Andrew " McQuade" Cant!

I'd love some MP3s of the original tape only first album. I have a bad copy of the tape and would love to get some higher quality digital versions of those songs.

These guys did a tape? I had no idea. I've found out a lot of things from blogging I probably never would have otherwise. I'll look hard for that tape, but it sounds pretty rare so I won't get hopes up. I really appreciate the info! - Marc

just wanted to say that www.mediafire.com/emoisdead has the okara demo (the tape) and the other 7" if anyone wants them.

both are amazing, in case you couldn't tell from the other stuff...

Thanks a lot for the link! I'll check it out as soon as I get home.

I recently found a copy of Okara's month like years at Amazon for 11 something. Im suprised. I talked ro one of the members to see if he had any of the s/t 7" or rose but sadly he ran out this past summer. Wished I asked sooner. He did make a bandcamp with some songs that didnt make it on the rose 7" and the s/t 7". So they may be new new to you guys