Song Of The Week: "Not Even Death" (Unhinged)

In the early days of the FE blog, I did posts on several formative favorites-- one being the band, Unhinged. It's about time for a revisit. I'd like to focus on "Not Even Death" because it was the second track I had ever heard from them, and it was the one that really grabbed me by the short ones. I had yet to hear Initial State or Zero Hour, so the impact of such simultaneously aggressive and mournful hardcore weighed heavy on me. It still does. And when I hear other bands playing emotive crust, I can't help but compare them to these bands, who set the quality benchmark high early on. Another thing that struck me about the 7" on which "Not Even 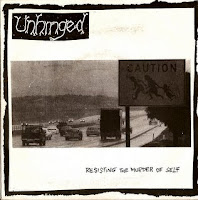 Death" appeared, is the choice of cover photos. It seems to be a stretch of the I-5 along Camp Pendleton or San Onofre. In the foreground is a sign I grew up seeing often: a silhouette of a family running-- their features drawn like caricatures of the Mexican stereotype. It felt eerie that these constant reminders of economic inequity, exploitation, and blatant racism would hit a nerve with a crust band thousands of miles away too. So maybe Unhinged left me with an early sense that the world wasn't so big after all, and that there were others out there who felt outraged. But really, I have no problem admitting that I was just blown away by the incredible power of their music.

How do I know where I'm going. When it's going too far. Is it beer or blood I'm sweating. Is it love or hate I'm feeling. And then you wake up one morning. You find your soul's into bits. And then there's nothing left not even death. Not even death. I've seen a man he had only one eye. He said to me I want you to die. Try to wake up but I'm not asleep. Try to walk and never to scream. Try to find the help inside myself. But all I've found is a black hole. All I have found is a man with only one eye. Who's telling me I want you to die. And then you wake up one morning from no sleep at all. You find some friends calling for you. Small gestures you daren't name. I've
seen a smile when I thought I'd die. They said to me we want you back to life.

Stay Female Fronted Blog just posted the band's discography in case you don't have it.
Posted by Batguano at 8:12 PM

awesome song. my favorite by them is "so it goes" from the first lp. shit shit shit what a great band they were.
mike.

Nice song and write up. I went right over to stay female and picked up the rest of their stuff, thanx for that link. No matter how many times I passed those signs they always struck me. The image itself is a very powerful one.

But Unhinged where always special! Love these 2 Records, this 7" and their tape i own! And im so happy i could see them live back in the days in 1997 or so...

Whoow its almost 12 years in the past...fuck! But thanx for this reminder!

Yo Jacqui, check your email!

Mike- I think "Reality" is my favorite track off the first album, but you can't go wrong with any of the tracks. Super amazing record!

Justin- thanks for the link to that article! There was a lot of information and insight I was completely unaware of. I'm gonna go ahead and link it in the body of the post since the address only pasted partially in your comment, and I think others will find it interesting too. Rock on.

Gravity Kid- you got to see them?! I think I was into them at that time, but never came close to the live experience. But it really only does seem like yesterday that I was hearing Unhinged for the first time...