Song Of The Week: "Guilt" (Plutocracy)

It occurred to me that I haven't posted anything really fast or really slow in a long while. In trying to reconcile the dearth of either, I got to thinking about the handful of bands that can do both the fast and slow thing expertly. While Plutocracy unleashed a shit-load of insane tunes, "Guilt"

always impressed me with the way the band fused a catchy as hell stoner sludge riff amidst the usual Pluto grind lunacy. They always used extreme tempo shifts, but in this song it's as though they discovered "Take As Needed For Pain" during the previous night's smoke-fest and couldn't resist infusing their new inspiration. "Guilt" also comes from my favorite phase of the band's life: the middle... the time when each track 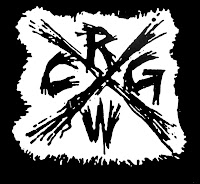 flirted with total chaos, but was always reined in by the talent of the players. Their take on grind is impossible to duplicate. Some of the members continued doing similar but different things in bands like No Less, Agents Of Satan(?), Spazz, etc. Respectable bands in their own right, but Plutocracy laid waste to all!