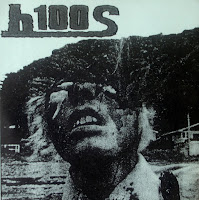 What we have here is a 3" CD collecting the two seven inches by pre-Nine Shocks Terror outfit, H100s. The EPs compiled were originally available through Burrito Records and Havoc Records respectively, but not anymore. The CD version posted here was released by short-lived PE offshoot, Profane Existence Far East (and it appears that PE "Near West" is ceasing operations as a label as well). If you've been heretofore deprived of the H100s experience, you're in for a nine track shock treatment of nutty Japanese influenced thrash/punk with over the top vocals and "fuck the world" lyrics. Two of the tracks are covers of Systematic Death and Gag Reflex songs (!) so you know this little disc rocks!

Get a "knife in your fucking ass!" here 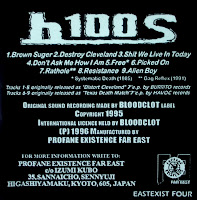