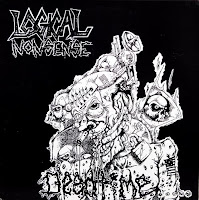 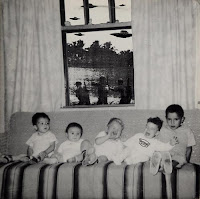 We have The Man, Javier O., to thank for both Logical Nonsense related records posted here. Javier was good enough to upload some rips of the rare "Deadtime" LP a while back. Then after informing me about LN's split with 23 More Minutes, he uploaded those tracks too! I usually like to post records I actually own, but these two are so remarkable and rare, I've got to do a post anyway (actually, I just found a test press of the 23 More Minutes split for dirt cheap on a certain auction site...). I'm sure Javier is cool with it, since as he mentioned before, the more people who hear this stuff, the better!
First up is Logical Nonsense's "Deadtime" LP, of which only 835 copies were ever pressed (in 1993, Very Small Records). On this debut full length, LN begins to work out their dark, vicious hardore that would evolve some on their split with Grimple, and further on their two Alternative Tentacles albums. Much of the material on this one is in line with the sound on the Grimple split, but with melodically sung (!) vocals off and on. I've grown to really love this slab....
Going further back, the 23 More Minutes/Logical Nonsense split was released in a single pressing of 1136 (in 1991, Very Small Records). Prior to hearing these rips, I only knew 23 More Min. from their ode to debonaire, humanitarian game show host, Bob Barker, on the "Vinyl Retentive" Comp. On the split here, they offer seven tracks of their quirky punk/hard rock. If you like Samiam, Rites of Spring, etc, you may (or may not) like these guys. Now, as far as Logical Nonsense's tracks go, the band is surprisingly "upbeat" and melodic. Maybe it's just surprising to me because I have been listening to all their other material for so long. The twelve LN songs are good, but I mainly love them for their historical value, as sort of embryonic artifacts of the Logical Nonsense discography.
D/L Logical Nonsense's "Deadtime" LP Here
D/L The 23 More Minutes/Logical Nonsense Split LP
Here 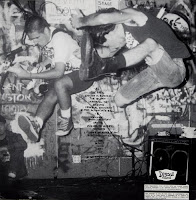 Thanks very much for this. I downloaded 'Expand the hive' a few days ago at http://shittypunkblog.blogspot.com/ and it's been on my ears since then. Nice to find this earlier stuff on your great blog!

and some might also appreciate jpgs of cover, back and inlays of both lps...
in here:
http://www.mediafire.com/?bqnmg0ilj1m

Mr. Maikoholic,
Thank you for the kind words. I hope you like "Deadtime" as much as I do!

Javier, you've done it again. Thanks a bunch. And hey, did you ever find Observers or Red Dons stuff in mp3 form? If not, let me know.

Okay, I re-uploaded both records with the new scans. All the scans came out great, by the way!

love the logical! I actually got the deadtime lp here locally but was ignorant of LN. bought it just based on the artwork. Then sought out the 23 min split. love how the band grew an just got better each release. deadtime and the grumble split will forever be my favorite. than you