Strictly For The Completists... 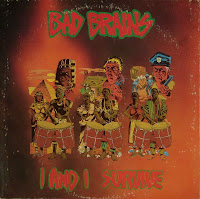 Have you ever listened to "Rock For Light" and wondered what it would sound like if the mixing was... different? Good, same here. Lucky for me, and the two of you out there who hear me, I stumbled across this 12" consisting of four tracks that would end up on "Rock For Light," but, as insinuated above, are mixed differently (better in my opinion). The main aspect that excites me is the fact that the bass can actually be heard in the hardcore songs (and on the one reggae song, "I & I Survive," the bass is almost overbearingly upfront, but that's okay with me)! But I think the overall improvement lies in the reduction in the saturation of treble that seemed like an annoyingly shiny layer of cellophane over the album recordings (the guitar tone on these versions is meaner, and HR doesn't sound like he'd been huffing helium along with his spliff (at least not as much)). Anyway, much like my experience with the "Omega Sessions," it's incredibly refreshing to hear these songs in a new/old light.

Although this post is more for the obsessive Bad Brains fans, I bet this would make a great introduction for any newcomer to the hardcore situation. If you haven't checked out Bad Brains' material from the early eighties, I can't urge you enough to do so. As mentioned in the last Bad Brains post, it is no longer worth discussing the fundamentalism and bigotry of (a) certain band member(s). So, on that note, this post is dedicated to all the queers and heathens!

Thanks for the memories! Look forward to hearing this different mix.

Thanks!
I had no idea this was a different mix, so I never went after it.
I'd have to say I'm a big fan of 'Black Dots' & 'Omega Sessions' more than the rest of the stuff it seems.

These versions were from the same Ocasik recordings as RFL, but I hear a big difference and they sound pretty rad... maybe I've just listened to "Rock For Light" too many times...

Since its release, I've come to favor "Black Dots" as my all time fave, but you can't go wrong with that ROIR tape... total classic!

Hey you just made my day, never heard of this.

Can't wait to see these living legends in Paris next month.

This record offers nothing new, technically, but these songs sound so great without weird studio glaze. Anyway, I caught these guys a couple months ago live. The musicians are in pretty awesome form, but HR... I don't know...