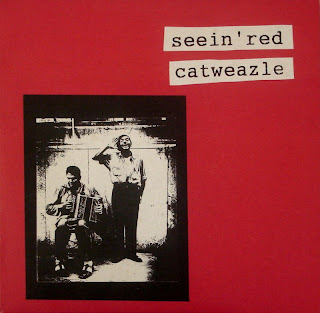 This post concerns two split 10 inchers involving veteran post-Lärm Dutch thrashers and socialist propaganda machine, Seein' Red. It would seem that these gents have been putting out the same record for years, but in no way is that bad. It's completely inspirational to see and hear a band that can stick to their principles and maintain their aggression consistently for so long. Not to mention, after hearing a few Seein' Red songs, I'm so amped I wanna pick up some red flags and start a general strike! Seriously, I totally respect this band's convictions, and split 10's are the best way to enjoy their noise-- if you're missing either of these records, download away!. First up is their split with Catweazle. On this one Seein' Red offer eleven whopping tracks of the fast as hell, feedback infused hardcore you can't help but love. There's a bit more variation than usual on these tracks, making this possibly my favorite Seein' Red release. Their fellow countrymen, Catweazle offer a different kind of punk: metallic, cleanly played, mid-paced hardcore. Lots of energy and talent from all the musicians in this band, some of whom played in an array of other Dutch bands, including Fleas and Lice. 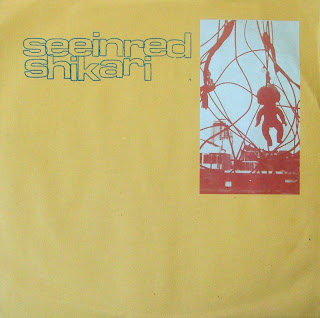 Up next is the Seein' Red's split with yet another very different Dutch band, Shikari. Seein' Red offer eight originals and a cover of "Myth Of Freedom" by Manliftingbanner (the "other" post-Lärm band). The band's reliability comes through again- all the tracks are fast, angry, and noisy! So throw on your Ché beret, start a pit, then start a revolution!

Shikari are fairly "popular" in various hardcore circles, but in case you're not familiar, they played a heavy version of the screamy hardcore that broke out in the nineties. Stylistic similarities point to such bands as (Union of) Uranus, One Eyed God Prophecy, and perhaps mid-period Envy (Japan). Tons of emotional despondency on these four tracks, which are also available on the band's discography CD.

Get a real copy HERE

all power to the old punks!

Shikari!!!! yeah! Shikari/Seein Red was supposed to be a post during last spring but somehow i denied to my self to post it. Bremen screamo crust rules!
you got taste of music!
cheers!