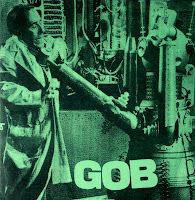 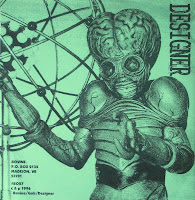 This blog is becoming GOB-central, but you're just gonna have to deal with it. There are several GOBular treats on this blog, just click here to see them all. This time we have an early split 7" they released on Bovine Records with obscure Swiss noise punk band, Designer. GOB's tracks are slightly different in the vocals department, but otherwise it's still the dreary, down-tuned, pulsating, heretical noise-sludge I've come to need in my life. The copy from whence these tracks were ripped was a little mistreated in its life, but these bands are noisy enough to the point that it doesn't matter. Neither band thought it necessary to supply song titles, but there's five of 'em-- two by GOB, three by Designer. 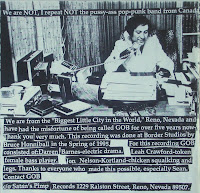 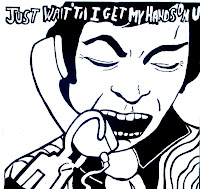 Enjoy
Posted by Batguano at 6:44 PM

Thanks! I'm working my way through the backlist, too. The Mandatory Marathon is pretty mixed (damn I love Noothgrush), as you noted, and so is the Autopsy Mayhem, but the Reno FNB is quite good! The AN/GOB split is way cool. I'm saving Wink for last!

Yeah, that ANB/GOB split's been gettin' a ton of airplay around here too! As for Martindale... that one's more of a conversation piece... although if you like GOB, their track shouldn't disappoint.

PS- Yes Noothgrush are the shit! They and Gasp (early stuff) were the main reason I ever gave sludge rock/metal a chance. They're still one of my first choices when I'm in the mood for The Heavy and The Sloooow!

man, do i miss bovine records...

Hey, thanks for all the GOB shit!! I recently discovered/became obsessed with Iron Lung, and it reminded me to dig out some old Gob records. Anyway, this is one I have and there are titles on mine:

Heck Yeah! That helps out a lot! I wonder why some versions had no track list...

Hi ! Could you please re-upload this album if you still have it ?