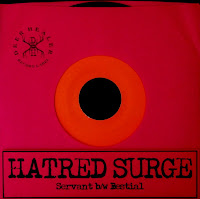 Deer Healer Records may decide to repress this recent Hatred Surge 7" if "demand is high enough." It sold out by the first day of release. I think that indicates a pretty hefty demand...

Until its reissue, I'll be glad to supply you with some homemade rips. Hatred Surge, as many know, is one the the most genuinely brutal grind/fastcore bands around. When I found out about this two song EP ("Servant" b/w "Bestial"), I expected one of the shortest records of all time (seeing as how most HS tracks last 30 seconds on average). Instead, the band uses this opportunity to expand their sound with two slow, deliberate, and heavy tracks that experiment with off-kilter time signatures and noise (combined with the usual heavy distortion/volume). This isn't the usual rectal splitting grind we are used to, but after a few listens I found it to be equally awesome!
This time around, Hatred Surge consists of Alex (vocals, and everything else) and Faiza (vocals) (same as their last couple of releases). On "Servant," Breathing Problem provides some noise embellishments. The packaging, as you can see, is not so much ugly, as it is minimal as hell (which is okay by me... lyrics are provided at least).
Link has been removed- Dear Healer Records has made this 7" available again!
Posted by Batguano at 10:29 AM

just came home from 3 days of (nearly) constant work and this post will be my stress killer! thanks!

Ha ha, stress killer! I like it. Actually, I love the tunes, it's really cool when folk stray from standard grind (though I'm fresh enough to it that I still dig hearing grindcore that most others are probably over already), but you can still hear it latent. Thanks again for the rarity!

Pabst, These little lullabys should do the trick!

Paris, Yes, I like these tracks too. If you haven't heard other Hatred Surge stuff, their/his first EP is fast and excellent:

To anyone who's interested: Puke'n Vomit Records just got some of these EPs in stock. There's a link on the side-bar if you want to own a hard copy.

woah thx for this!
i also upped the hatred surge-same 7" on my blog.what a cool record!

Yeah, everything HS has done has been amazing (that first EP may still be my favorite). I also agree about LOI. The tracks on the first LP kind of run together (too similar)... but they played them tight as hell!

Hey, cool. Thanks for the link!

Thanks for the tip back to the EP, batguano! It's great, especially the mayhem that is "Numb." Perfectly awesome.

Yeah, I'm glad you stole my rip of this.

I didn't steal shit. I made these from my copy.