For Those Bitter About Life In General 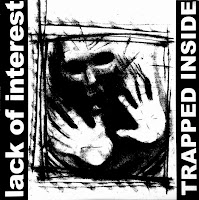 Judging from the download stats, the visitors who happen upon this site like their music with plenty of speed. I haven't neglected to notice this, and to prove it, here's a fast one for you. This LP, "Trapped Inside" is, I believe, the first full length by LA "powerviolence" heroes, Lack of Interest (Slap-A-Ham Recs, not sure about the date, but it's SAH 52). This record sees the band at its most raw, pummeling you with 24 tracks (only four of which break the one minute mark, and even then only barely) of unbridled spite delivered with surgical precision. The terse vocals are most definitely influenced by fellow Burbankers, Infest. The Denunzio intonation is hard not to notice, but on these recordings I also detect some of that guttural barking of Paul Bearer (Sheer Terror). Either way, this outing is fierce as hell, and there's even a few LOI classics that (would) appear(ed) elsewhere in different form, such as "What's Up" and "My Life." LOI's album "Take Another Step" is easy to find in some distros and ebay stores, but you can find their split EP with Stapled Shut and various comp. tracks here, their split with Spazz here, and their unreleased LP with a different singer here. 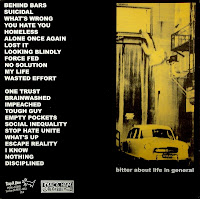 All Out Ward said...

Dude, this blog is fucking incredible. Keep up the exemplary work--you've got something fantastic here.

This blog is unworthy of your kindness! Nonetheless, thanks. Trust me, your words are appreciated.

Nice one sir. I went to Jr and Senior High in Burbank and actually went to school with the drummer who runs Deep Six Records. Infest were actually from up by Canyon Country/Saugus I believe. Sometimes I gotta side with the majority and dig on the fast stuff too. Thanx again.

Hey Justin, thanks for stoppin' by and I hope your summer's going well. Yep, the fast stuff is in my blood too. I have a feeling, though, that this record was posted elsewhere since not many people downloaded it. Oh well. Oh, and thanks also for the correction on the Infest geography. LA is a big, scary, confusing, sprawling mess to me...

hey,cool lp!talking about their lp output nonetheless i like their 2nd one better.but this is really a classic.