A Great Mass Of Despair: Silence & Burning The Prospect 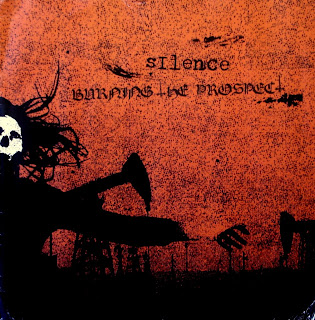 There'll be no holiday cheer on this blog, not in the presence of Poland's mighty and brooding Silence! Say what you will about "neo-crust" and other such epithets; what it boils down to is that Silence plays powerful hardcore. Yes, there are song titles like the title of this post, and they've been known to throw in some piano and violin at times, but the proof is in the final product. The tracks on this split with Burning The Prospect are two of the band's best-- they're solidly written, crushing, and not as meandery as some of the band's other work. As always, check out the Box o' Songs for a sample. And if the more straight forward crust-core approach is more your thing, Burning The Prospect should not be missed. Their three tracks were recorded at the 1in 12 Club, if you know what that means. If you don't, let's just say that that venue is notoriously connected to acts like Doom, Police Bastard, Ruin, etc. BTP completely rages with some stomping, thrashy beats, and powerfully distorted guitars. The songwriting is not super typical, and keeps their modern crust sound from blending in too much with that particular over-saturated scene. Keep an eye on this band; needless to say, this split is highly recommended!


The Silence/Burning The Prospect Split 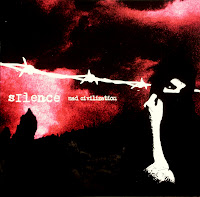 To rectify another injustice where I ripped a good record at 128kbps (unknowingly, of course), I have re-ripped Silence's "Mad Civilization" 10," this time at 320 kbps. They're not as tight on this early release, but they hold nothing back in laying all their guts and emotions out on the table. It's powerful stuff, but with song titles like "Suffering," "Tears Of Humiliation," and "In A Tunnel Without End," you probably shouldn't throw it on during your New Year's Eve Party!

thanx a lot for all this good stuff.. and it seems the Saké 10" doesn't work anymore..
Cheers! antoine